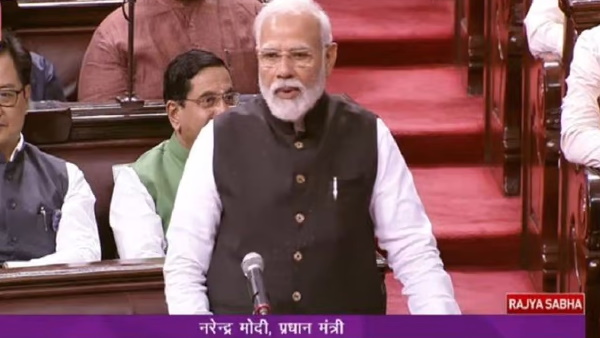 New Delhi, March 31: The Rajya Sabha bid farewell to its 72 retiring members on Thursday. Chairman M. Venkaiah Naidu and Prime Minister Narendra Modi bid farewell to the members on the occasion. Chairman M. Venkaiah Naidu also mentioned several members and appreciated their work and their presence. On the occasion of farewell of 72 retired members of Rajya Sabha, Prime Minister Narendra Modi said that our Rajya Sabha members have a lot of experience.

On Thursday, 72 members were given farewell in the Rajya Sabha. The tenure of these members, representing 19 states in the Upper House, is going to be completed between March and July. Retiring members include AK Antony, Anand Sharma, Ambika Soni of Congress, Kapil Sibal, Suresh Prabhu of Bharatiya Janata Party, Subramanian Swamy, Satish Chandra Mishra of Bahujan Samaj Party, Sanjay Raut of Shiv Sena, Praful Patel of Nationalist Congress Party. Huh.

At the same time, the farewell speech of 6 hours 27 minutes was held in the Rajya Sabha, which was the longest so far, in which 65 speakers remembered the contribution and contribution of the retired members. Speakers include the Speaker, Prime Minister, Deputy Chairman, LoP, leaders of nine parties, 11 other members and 40 retired members. For the first time, six sitting members extended an invitation to all members of the Rajya Sabha to perform music and vocals in honor of the retired members at a dinner hosted by Chairman M Venkaiah Naidu tonight.

Another teacher suspended in Kalaburagi, Karnataka, a student was appearing in school wearing a hijab