A fierce clash broke out between AAP's state vice-president and SDM, SDM said - You just shut up nonsense lady
Advertisement 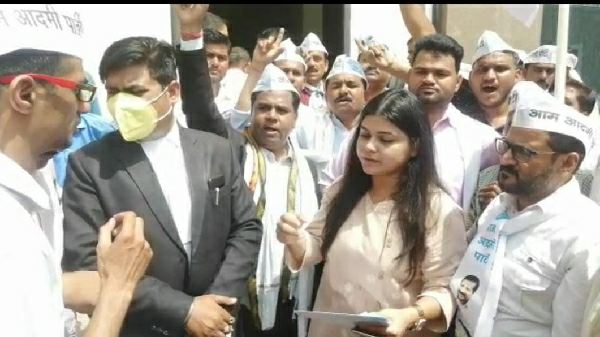 Gwalior, May 11, Aam Aadmi Party’s state vice-president Manisha Singh Tomar, who reached the collector’s office to fight the public’s fight in Gwalior, got into a heated argument with SDM CB Prasad. The SDM, who turned red in anger, also lashed out at Manisha Singh Tomar. Losing his cool, the SDM told the state vice-president – ​​Hut hut from here, you just shut up nonsense lady.

In fact, in the past days, action was taken by the administration to remove the encroachment in Footi Colony. After this action many people became homeless. Demand is being made by the Aam Aadmi Party to give houses to these homeless people. In order to fulfill this demand, on Wednesday, under the leadership of Aam Aadmi Party’s state president Manisha Singh Tomar, Aam Aadmi Party workers had reached the collector’s office to give a memorandum to the collector. After reaching the collector’s office, the Aam Aadmi Party first demonstrated, after which they waited for the collector to submit the memorandum. SDM CB Prasad reached instead of Collector Kaushalendra Vikram Singh to take the memorandum. Seeing the SDM, there was a demand to call the Collector by the Aam Aadmi Party. The SDM first tried to convince them that the memorandum should be given to them only. Despite repeated requests by the SDM, the memorandum was not given by the Aam Aadmi Party, but state vice-president Manisha Singh Tomar was adamant on calling the collector. A debate started between SDM and Manisha Singh regarding this matter. Slowly the debate escalated. The SDM got so annoyed by this that he started shouting loudly at the state vice-president. The SDM even said angrily that – Hut hut here se you just shut up nonsense lady. Everyone was surprised to see this anger of the SDM. After this clash, Manisha Singh, while speaking in front of the media, said that the SDM spoke very rudely, he should not have been in this post. They called me shutdown, we are not illiterate people, we know the meaning of shutdown. SDM CB Prasad has been accused of having met with land mafia from Manisha Singh. Simultaneously, Manisha Singh said that when we are being treated like this, then you can guess how these officers would behave with the laborers.

Security of 8 more VIPs removed in Punjab, these are the names including Harsimrat Badal, Sunil Jakhar