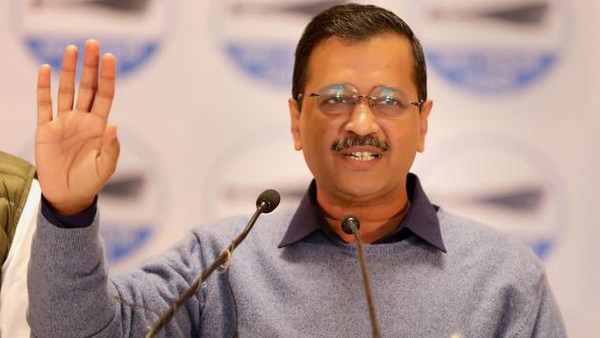 New Delhi, May 25:
Nearly a month after Jahangirpuri was vandalized by bulldozers, Delhi Chief Minister and Aam Aadmi Party national convener Arvind Kejriwal on Monday protested the demolition drive of BJP-ruled civic bodies. The AAP has been accusing these municipal corporations of corruption. AAP has been raising the issue of corruption against BJP for the last three years. To counter these allegations, BJP had decided to integrate these municipal bodies a few months back. In these circumstances, Kejriwal needed a new strategy through which his party could compete with the BJP in the civic polls in Delhi. Now the Chief Minister of Delhi has made it clear that the Aam Aadmi Party will surround the BJP on its bulldozer politics in the coming MCD elections.

Last month, after the Jahangirpuri sabotage, the AAP kept a strategic silence on the issue of Muslims. Instead, Kejriwal’s party claimed that the BJP had illegally settled Bangladeshis and Rohingyas to spread communal violence across Delhi. However, Aam Aadmi Party MLA Amanatullah Khan opposed the vandalism, due to which he was also arrested for obstructing government work. The AAP party also kept completely silent on the arrest of its own MLA. But, after about 24 hours, senior AAP leader and Deputy CM Manish Sisodia held a press conference and without naming Khan, opposed the police action. In such a situation, Kejriwal’s all-round attack against bulldozer politics shows the new strategy of the party.

Manish Sisodia first attacked BJP. He opposed this campaign by writing a letter to Union Home Minister Amit Shah on 15 May. The next day, Kejriwal met his party MLAs to decide on an action plan. Kejriwal asked his MLAs to actively oppose this bulldozer campaign. On the day of Jahangirpuri vandalism, no AAP leader or local MLA went to the spot. The local MLA reached the spot 24 hours after the incident.

The term of the BJP-ruled MCD ended on May 18. Now Kejriwal has blown the trumpet of campaigning for the MCD elections. He said the BJP should immediately face free and fair elections. Within 24 hours of his statement, the AAP government sought a report from the MCD on these sabotage.

The political strategy of the Aam Aadmi Party has changed during the last few years. The party no longer shies away from putting forth its idea of ​​Hindutva. Arvind Kejriwal started maintaining silence on reports of atrocities against Muslims since the 2020 Delhi Assembly elections. During this election, BJP had launched a massive polarization campaign in Delhi.

This was the time when the Citizenship Amendment Act (CAA) was being opposed in Delhi as well as in the whole country. Thousands of people led by women took to the streets of Shaheen Bagh to protest against the CAA. Kejriwal had kept complete silence. On the contrary, he had said that if he had the power, the government would have removed these protesters immediately. Similarly, the AAP claimed that the Shaheen Bagh protest was organized by the BJP.

The AAP took the same stand in the case of the BJP-ruled MCD’s sabotage campaign. A significant number of voters in Delhi live in unauthorized colonies. So, if this kind of sabotage campaign continues then these people will get affected and their grievances will increase, which will be reflected in the elections. That’s why the AAP has chosen the issue of bulldozer politics, but it remained silent on the real issue of targeting the Muslim-dominated colonies of Delhi. The main beneficiaries of the Kejriwal Model of Governance are the people of the lower and middle classes. He is also the core voter of AAP party in Delhi. Kejriwal felt that keeping silent on this issue of sabotage could have a bad effect on the AAP party in the elections.

To stay away from the real question of Delhi Municipal Corporations targeting minorities, the AAP has taken back the issue of unauthorized colonies. The regularization of around 1,800 colonies, where more than 50 lakh Delhiites live, is a matter that comes to the fore before every election battle in Delhi. Ever since Sheila Dikshit was the Chief Minister, the issue of regularization of unauthorized colonies before the elections has been a frequent issue. Earlier, AAP, Congress and BJP had promised to regularize these colonies to woo voters. However, nothing special happened at the ground level.

Delhi has a strange trend in electoral politics. The voters of the state chose Arvind Kejriwal in the assembly elections, but voted for the BJP in the MCD and parliamentary elections. This year’s MCD elections are important for Kejriwal. Despite becoming CM for the third time, Kejriwal has limited powers. The reason for this is the three-tier administrative system of Delhi. After the victory of Punjab, Kejriwal wants to win the MCD elections to gain more influence in Delhi.

When the Congress was in government, it divided the unified Delhi Municipal Corporation into three parts. This unplanned split put MCD under tremendous economic pressure. Then after AAP came to power, due to the party’s tussle with the BJP, its financial crisis increased further. The BJP accused the Kejriwal government of not releasing funds to the corporations, while AAP, on the other hand, accused the fund of misappropriation, which led to the bankruptcy of MCD. This crisis reached its peak during the Corona epidemic. The Municipal Corporation was not able to pay salaries to its employees. Forced, these workers had come out on the streets. Taking advantage of this opportunity, AAP surrounded the BJP.

However, this year the central government decided to re-merge the three municipal corporations. This was BJP’s strategy to counter allegations of corruption leveled by AAP. With this, AAP no longer has an issue to take on the BJP. In the meantime the demolition started. The AAP changed its strategy and aligned it with claims of misrule by the BJP-ruled MCD.