AAP and BJP workers clashed with each other while protesting in Delhi, watch VIDEO
Advertisement 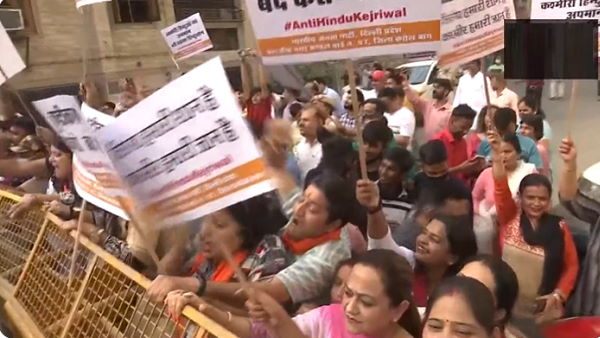 new Delhi. The tussle between the Aam Aadmi Party (AAP) and the BJP intensified today when workers of both the parties came face-to-face during a protest in the national capital. The Aam Aadmi Party (AAP) was protesting the Delhi BJP chief’s alleged remarks on Chief Minister Arvind Kejriwal, while the saffron party was protesting against Kejriwal’s remarks on the film The Kashmir Files.

In a video, AAP workers can be seen demonstrating in front of a large number of BJP protesters. Where the police also failed to stop the confrontation between the two sides. The workers of both the parties came in front of each other and created a ruckus. In the video, protesters were seen shouting slogans against each other and waving placards. Earlier on Monday, a similar scene was witnessed in the Delhi Assembly, following which a motion of condemnation was passed against Delhi BJP President Adesh Kumar Gupta for allegedly making derogatory remarks against CM Kejriwal. Three BJP MLAs Anil Bajpai, Jitendra Mahajan and Ajay Mahawar were also suspended for some time amid strong protests by AAP over Gupta’s remarks.

Controversy over remarks against Kejriwal
Gupta’s allegedly derogatory remarks came during a protest in Delhi on Sunday against Kejriwal’s criticism of the BJP’s demand to declare The Kashmir Files tax-free. Taking objection to Gupta’s remarks, AAP MLA Mohinder Goel moved a censure motion against the Delhi BJP president in the assembly. Other AAP MLAs also joined him and started raising slogans, to which the BJP MLAs gave a strong reply. Later, the House was adjourned for 15 minutes due to the uproar. BJP MLA Ramesh Bidhuri said during the discussion on the motion of condemnation, “If anyone has used abusive words, I condemn him.”

Claiming that the video of Gupta’s purported remarks is fabricated, he said, “If there is any truth in the allegations against Adesh Gupta, then I will apologize to CM Kejriwal with folded hands, otherwise Mohinder Goyal will have to apologize in the House.

Gupta also denied making derogatory remarks against Kejriwal and said, “Using abusive language against anyone is not the culture of BJP. Kejriwal showed inhuman attitude by terming the film as a lie, depicting atrocities against Kashmiri Pandits. Apologize to Kashmiri Pandits.”

Mamta Banerjee took a jibe at the central government on her visit to North Bengal, told the leaders not to eat Delhi’s laddus