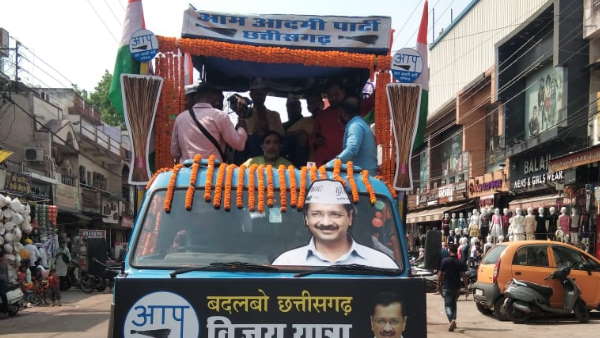 Under the leadership of Shri Gopal Rai Ji on the victory journey of “Badbo Chhattisgarh”, the community of common citizens became a witness to the beginning of the foundation of change. A few rays of the sun of change, penetrating the darkness of Chhattisgarh. @AamAadmiParty pic.twitter.com/Ng3fCh1uvV

During his Raipur stay on Monday, Gopal Rai made a big statement saying that Chhattisgarh CM Bhupesh Baghel is copying Delhi government schools. While giving a statement, Aam Aadmi Party MLA from Burari Assembly of Delhi, Sanjeev Jha said that even to imitate someone, intelligence is needed. The Bhupesh Baghel government of Chhattisgarh is copying the Delhi government, but it is not succeeding. Gopal Rai said that Punjab has adopted the governance model of Kejriwal government of Delhi, in the same way Chhattisgarh will also trust Arvind Kejriwal. Gopal Rai claimed that Aam Aadmi Party will give tough competition to BJP and Congress in Chhattisgarh. Stating that in Chhattisgarh, many big faces of the ruling party and the opposition are in touch with the Aam Aadmi Party. If the party wants, then such BJP and Congress can take a decision to bring out the leaders who joined AAP in the electoral fray.

On Monday, people gathered in the Aam Aadmi Party’s Vijay Yatra organized in Raipur. Excited by the victory of Punjab in the Vijay Yatra, the workers registered their presence in hundreds of vehicles in more than 2000 numbers. The eyes of the Aam Aadmi Party have now stopped on the politics of Chhattisgarh. Team Kejriwal has made his plans completely clear by starting the “Badbo Chhattisgarh” Vijay Yatra in Raipur, the capital of Chhattisgarh. Gopal Rai called upon the general public during this show of strength of AAP that if it supports, then like Punjab, in the next assembly elections, Chhattisgarh will also get revolution like Punjab.

Apart from Gopal Rai and MLA Sanjeev Jha, Suresh Kathait also participated in the program organized at Science College ground in Raipur. During this, Aam Aadmi Party’s Chhattisgarh convener Komal Hupendi also energized AAP workers. AAP leaders told that “Badbo Chhattisgarh” Vijay Yatra will go to every part of the state. He said that the Aam Aadmi Party will also issue a toll free number to become a member in Chhattisgarh.