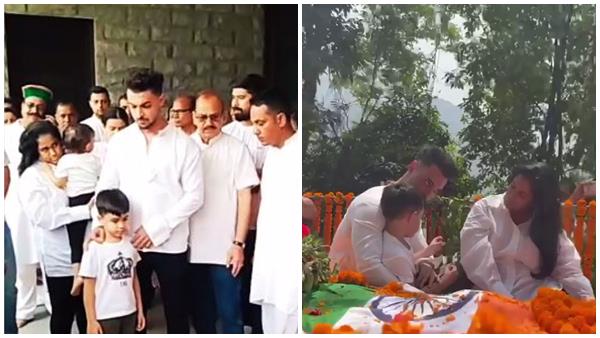 Mumbai, May 12:
Actor Aayush Sharma’s grandfather and veteran Congress leader from Himachal Pradesh, Pandit Sukh Ram Sharma passed away on Wednesday at the age of 94. Ayush Sharma, his wife Arpita Khan and their son Ahil Sharma reached Sukhram’s last rites on Thursday. Whose video was shared on social media.

Ayush-Arpita arrived at Grandfather’s funeral
In the pictures that surfaced, the family is seen sitting in a vehicle with Sukh Ram’s body as they are being taken towards the ground for the last rites. In another video, Ahil is seen sitting on Aayush’s lap. In a video, Arpita is seen holding Ayat in her lap. Because Ahil and Ayush Sukh offer flowers to Rama’s body.

Ayush gets emotional remembering grandfather
Earlier, Ayush Sharma remembered his grandfather and wrote a note for him. He wrote that “With a very heavy heart I bid farewell to my beloved Grandfather Pandit Sukh Ram Sharma. Even though you are gone, I know you will always be with me. You will be watching over me and blessing me as always May your soul rest in peace Grandpa, you will be greatly missed.”

Ayush’s grandfather died on this day
Let us tell you that Ayush Sharma’s grandfather Sukh Ram had a brain stroke. After which he was admitted to AIIMS, Delhi on 7 May. But, he died in the hospital at 1:35 am. However, earlier there was a rumor about his death on social media, which was denied by Ayush Sharma.

‘Open the secret rooms of the Taj Mahal and tell what is in it’, this actor’s demand amidst the controversy