After RR's victory, Bolt took off his shirt and gave it to the child, the little fan immediately wore it - VIDEO
Advertisement 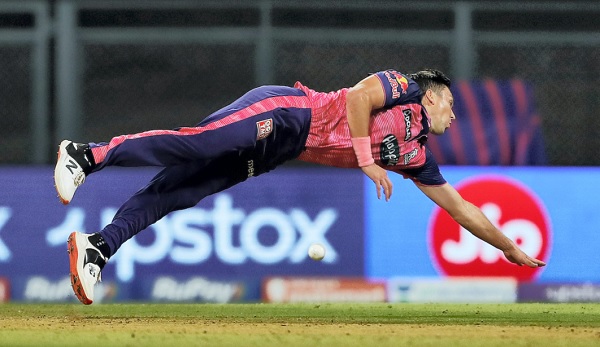 Ahmedabad 28 May: Rajasthan Royals (RR) fast bowler Trent Boult has done a heart-winning job. His team has reached the final match, all the players of the team are very happy. Left-arm pacer Boult gifted his Indian Premier League (IPL) jersey to a fan after defeating Royal Challengers Bangalore (RCB) in Qualifier 2 at the Narendra Modi Stadium in Ahmedabad. In a video uploaded to the Royals’ Twitter handle, Bolt was seen taking off his jersey and giving it to the young child.

The kid was happily taking off his shirt but Bolt said he didn’t need it. Bolt then gave his jersey to a member of the Royals, who later gave it to the young boy. The boy was happy after he got the New Zealand pacer’s jersey and put it on.

Bolt has been in impressive form in the 2022 IPL as well. The left-arm pacer has taken the same number of wickets in 15 matches at an economy rate of 8.24. If we keep in mind that Bolt bowls in the powerplay and in the death overs, then this economy rate is correct.

The Royals have already qualified for the IPL 2022 final and are set to face Hardik Pandya’s Gujarat Titans (GT) at the Narendra Modi Stadium in Ahmedabad on Sunday, May 29.

Captain Samson is happy with the win but admitted after the match that his team’s journey in the T20 league has been tough. So he also commended RR for stepping up and pushing his game in difficult moments.

Sanju Samson, who became the second captain after Shane Warne to lead Rajasthan Royals to the final, said, “It was really tough. But we are used to coming back in IPL. It is a long tournament where you go through ups and downs. While bowling first, the wicket was sticking a bit and helping the fast bowlers. The bounce was good, which made it easy for the spinners to hit. But our fast bowlers bowled really well.

Djokovic is ‘heartbroken’ to see Boris Baker in jail, asking son – can I help

‘Sir auto rickshaw is waiting for you’, fans angry at Siraj, who made a record of hitting 31 sixes