After winning the gold medal, Lakshya Sen celebrated in the style of Sourav Ganguly, took off the jersey like 'Dada'
Advertisement 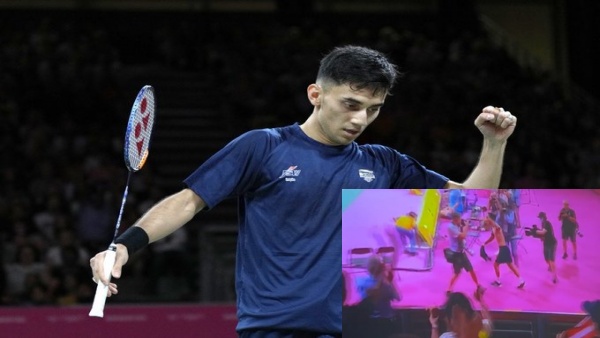 Lakshya Sen took off his jersey after winning

Lakshya Sen took off his jersey like Sourav Ganguly after winning the Badminton Singles final at the Commonwealth Games. Lakshya Sen won 19-21, 21-9 and 21-16 and became the Golden Boy. With this victory, Lakshya Sen also added his name to the list of gold medal winners for the country. The joy of victory was such that he took off his jersey and started shouting with joy.

Lakshya Sen had achieved the feat of winning the gold medal in the Thomas Cup held earlier this year before the Commonwealth Games. Lakshya Sen is being seen as the future of India for badminton. At such a young age, Lakshya Sen is leaving his mark by visiting the country and abroad. In such a situation, as he gets older, he will continue to mature even more. Lakshya Sen has such ability that he can master his game.

The celebration .
What a comeback after losing first set, Lakshya Sen.🥇 pic.twitter.com/tVFIaYzxf7

Since winning the gold medal, the atmosphere of discussions on social media about Lakshya Sen is hot. Especially the video of Lakshya Sen taking off his jersey is becoming increasingly viral. Fans are giving different types of reactions on this video. Lakshya Sen not only took off his jersey after the win but he also threw his racket among the spectators. People are very fond of Lakshya Sen’s way of celebrating his victory.