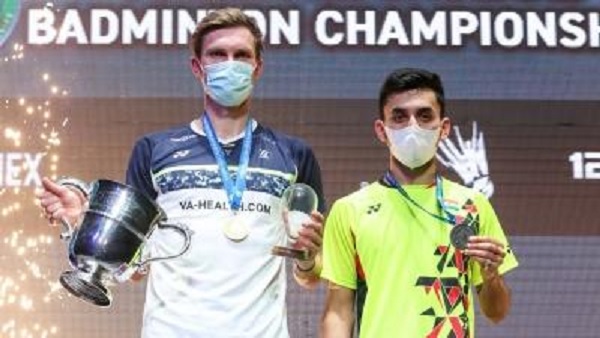 Mumbai : Indian badminton player Lakshya Sen has missed out on creating history at the All England Badminton Championships. Lakshya is defeated in the final of the tournament. He was defeated in straight games by Viktor Axelsen of Denmark. Victor won the match 21-10, 21-15. Lakshya Sen, 20, worked hard throughout the tournament. He surprised everyone by defeating defending champion Ke Li Jijia in the semi-finals, but he lacked experience in the final.

At the same time, Victor won the tournament for the second time. He had earlier won the tournament in 2020. No. 1 Victor started the match strongly and took a 5-0 lead. After that Sen got some marks. However, Victor did not let this edge go down. He won the first game in 22 minutes. In the second game too, Victor took a 2-0 lead. After that Sen struggled to level the score at 4-4. After this, Victor earned 4 points in a row and took an 8-4 lead. Still, Sen confronted him boldly, but things did not work out. Victor won the second game in 31 minutes.

Let us tell you that this was the sixth match between Lakshya Sen and Viktor Axelsen. Of these, Victor has won five. Sen has won only once. Lakshya reached the final of the Indian men’s badminton tournament after 21 years, but even after 21 years, the dream of winning the Indian title could not be fulfilled. Before that, only Prakash Padukone of India won the tournament in 1980 and Pullela Gopichand in 2001. Lakshya Sen had won a bronze medal at the World Championships this year.

Talking to the media after the men’s singles final of the All-England Badminton Championships, Viktor Axelsen said, “The goals were challenging for me. Along with defending, he was also attacking. He played a really good game.” While answering a question, Lakshya Sen admitted, “I made a lot of mistakes in the beginning of the first game. It cost me the first game.” Sen, just 20, didn’t think he was nervous. He said, ‘There was a lot of pressure before the match. But once I entered the court, it was just another match. I think I am playing good badminton. It also gives me a lot of confidence.”