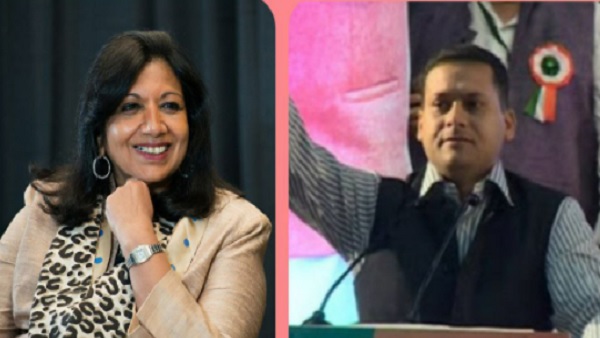 Kiran Mazumdar has written in her tweet that ‘Karnataka has always had inclusive economic growth and we should not allow such communal boycott, if ITBT becomes communal it will destroy our global leadership, Chief Minister Basavaraj Bommai, Please remove this growing religious divide’.

‘Our CM is a very progressive leader’

After this, praising the CM in his next tweet, he wrote that ‘Our CM is a very progressive leader, I am sure he will solve this issue soon’. In his tweet, he has tagged Chief Minister Basavaraj Bommai.

But there has been a strong reaction from the BJP in this regard. BJP’s IT cell chief Amit Malviya has called Kiran Mazumdar’s tweet unfortunate.

He tweeted that ‘It is unfortunate that people like Kiran Shaw impose their personal and politically motivated opinions and associate it with India‘s leadership in the IT/BT sector. Rahul Bajaj once said the same thing for Gujarat, today it is a major automobile manufacturing hub. Go figure….’

At this time Majumdar and Malviya’s tweets are becoming increasingly viral on social media and people are commenting fiercely on it.

What is the ruckus?

In fact, in many parts of the coastal region of Karnataka, Muslim traders have been banned from opening stalls in annual temple fairs. Recently, Hinduist organizations objected to the participation of Muslim traders when many of these Muslims closed their shops in protest against the High Court’s decision to continue the hijab ban in schools and colleges. Angered by this, it has been decided not to allot shops to Muslim traders in the temple premises, which has created a ruckus.

What did the government say?

The Karnataka government said in the assembly that ‘the ban on non-Hindus doing business inside the temple premises is based on a rule introduced in 2002 under the Karnataka Hindu Religious Institutions and Charitable Endowments Act, 1997’.

‘Take a padyatra from Mummy ji’s house to Manmohan ji’s house, Congress will understand why inflation has increased’