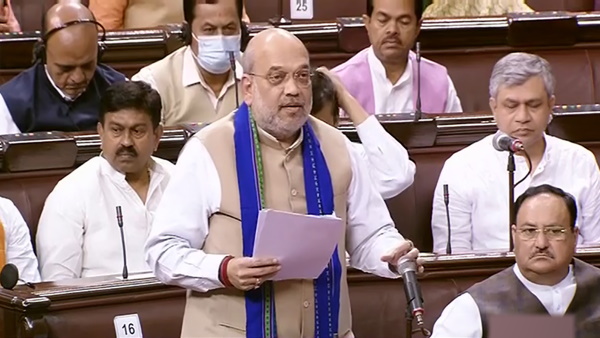 New Delhi, 05th April: Union Home Minister Amit Shah today accused the Aam Aadmi Party government in Delhi of “stepmotherly behavior” towards the three civic bodies in the national capital. Speaking in the Rajya Sabha during the discussion on the Bill to merge the three municipal corporations, Amit Shah said that there is nothing in the government records on the motives behind bifurcating the Delhi Municipal Corporation in 2012.

That said, ten years have passed, and the experience has been different. When the civic body was divided into three parts, the purpose must have been good. To provide better services to the residents. But it is not giving result. Listing the reasons behind this, he said, “The policies adopted by the three municipal bodies are different. In the same city, there is no uniformity in the policies. This is because when the civic bodies were divided into three parts , so they did not have financial resources and responsibilities.

Shah said that, ‘All three municipal corporations were treated like a step mother, it is natural that the opposition members protest, but listen to me. Shah said that the Panchayati Raj and the civic body system would not work if the governments behave step-motherly with the civic bodies for political purposes. We also have such governments in many states, but no such behavior has been seen anywhere. I will keep the figures for now, if you have any objection on that let me know. In the last ten years, more than 250 strikes were held in the municipal corporations over wages and other issues.

Shah said the two municipal corporations are not in any state to sustain themselves financially, so they restructure taxes and change policies to continue operating. He said there is “deep displeasure” among the employees of the municipal bodies over the difference in working conditions. He said, “The step-motherly behavior of the Delhi government is not allowing these three bodies to function properly.

The Home Minister said he would put forward “concrete reasons” and figures to support his statement. “The state government should rise above political considerations to give civic bodies their due,” he said. Opposing the bill, Congress leader Abhishek Singhvi said, there are four things in this bill: it is constitutionally ambiguous, it is legally unstable, it is administratively wrong and it is politically hypocritical.

On attachment of properties on behalf of ED, Sanjay Raut said – shoot me or send me to jail…

Government employees will celebrate Cycle Day every Wednesday in Lakshadweep