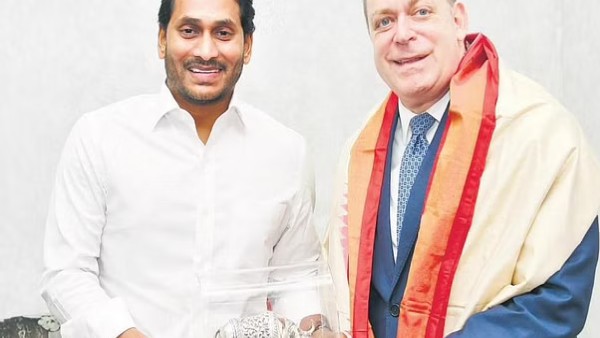 Hyderabad, May 18:
US Consul General (Hyderabad) Joel Reifman met Chief Minister YS Jagan Mohan Reddy at his camp office in Tadepalli on Tuesday. During this, he thanked the US Consulate for their support in improving relations between the US and Andhra Pradesh. Appreciating the Andhra Pradesh government in the field of education and health, he said that this state is one of the effective states of India in controlling the epidemic. He also appreciated the steps being taken by the Andhra Pradesh government in the renewable energy sector.

The US Consul General said investment opportunities between Andhra and the US will improve further. Visakhapatnam has the potential to emerge as one of the great cities of India. He congratulated the Andhra Pradesh government for giving priority to the empowerment of women and weaker sections. He also thanked the Chief Minister for his support in launching the American Corner in Visakhapatnam.

Reifman said that during my three-year tenure, I had four meetings with the chief minister. This shows the special initiative of the Chief Minister in maintaining good relations between America and Andhra Pradesh. Special Chief Secretary (Chief Minister’s Office) KS Jawahar Reddy and Special Secretary M Harikrishna were also present during the meeting.

What did Owaisi say on Hardik Patel leaving Congress just before Gujarat elections?

Gyanvapi Masjid: Why is the 1991 law which is being argued by the Muslim side under question?