Ankhphodwa case: When police blinded 33 people by putting acid in their eyes in Bhagalpur
Advertisement 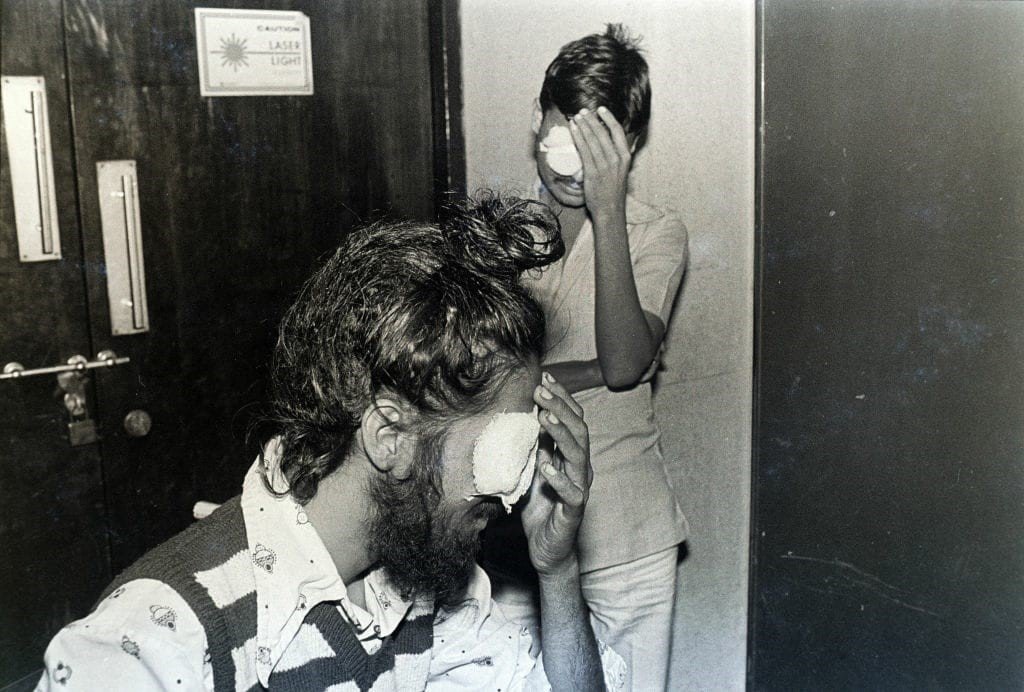 In 1980, when photographs of blind people were published in Bhagalpur for the first time, it shook the entire public badly. Some policemen, in the name of doing justice immediately, took the law into their own hands and poured acid into it by tearing the eyes of 33 under-trial people. Later a film was also made on it ‘Gangajal’.

Renowned journalist and former Union Minister Arun Shourie’s autobiography has recently been published ‘The Commissioner for Lost Causes’ in which he has given a detailed account of the incident, which was first broken by his newspaper Indian Express.

Shourie recalls, “In November 1980, our Patna correspondent Arun Sinha came to know that in Bhagalpur the police and the general public were blinding the prisoners in jail by pouring acid on them. When they started to inquire about it, Patna I IG (Prisons) refused to give any information about this.”

Arun Sinha, who later became editor of Goa’s newspaper Navhind Times, says, “When I met Bacchu Lal Das, the superintendent of Bhagalpur Jail, he was initially very cautious. He was hesitant to answer my questions about the blinded prisoners. But when he checked who I am and that I actually work for the Indian Express and what kind of news stories I had done before, he was completely open to me.

It has been more than 40 years since this incident but Arun Sinha has not forgotten Bacchu Lal Das yet.

Sinha says, “He was a very brave officer. I will always remember him with great respect because from the day he told me all those things I could see that he is a man of pure conscience which is not usually found in government officials. Not only this, he was also fearless. The biggest example of this was found when the government suspended him and he fought the power of the government very vigorously. Later he was restored after much effort. Putting his entire career at stake, he showed me such documents, which made it clear that somewhere the police is involved in this heinous crime.

I asked Arun Shourie how these prisoners were blinded. Shourie replied, “These people were caught and taken to the police station where the cops would tie them up, drop them on the ground and sit on top of them. Some policemen used to hold his legs and arms. Then the sharp, long swollen ‘Takwa’, which sewed the sack, was barked in his eyes. A so-called ‘doctor sahib’ used to come who used to pour acid on the broken eye to make sure that he could not see at all.

There was also an incident when seven prisoners who were blinded were lying in a room. Then a doctor came inside. Arun Shourie says, “He asked those prisoners in a very sweet voice, do you see anything? The prisoners got some hope that maybe the doctor is feeling sorry for his actions and maybe he has come to help us. Two prisoners said they could see a little bit. Hearing this, the doctor left the room. After this, both the prisoners were taken out of the room one by one to another room. There, after removing the cotton from his eyes, he was torn once again and acid was poured into it. This cycle was going on since July 1980. The police used to call acid as ‘Gangajal’.

Relatives of a victim of Bhagalpur incident

Umesh Yadav is still alive among the blind people. At present his age is 66 years and he lives in Kupaghat village of Bhagalpur.

Yadav told the BBC, “We were caught by the police and taken to the Kotwali. There he blinded us by pouring pure acid in both our eyes. Later we were sent to Bhagalpur Central Jail. There Jail Superintendent Das Saheb had prepared our statement and sent it to Supreme Court lawyer Hingorani Sahib. Before his efforts, we started getting a pension of Rs 500 per month, which later increased to Rs 750. But sometimes she meets after two months and sometimes after four months. A total of 33 people were subjected to this atrocity, in which 18 people are still alive.

Bhola Choudhary, a resident of Baradi, says, “The police first pierced our eyes with a puck and then poured acid on it. This was done to nine people with us.

Later, when Arun Sinha did further investigation, it was found that at least one member of the Jagannath Mishra cabinet was aware of this campaign for the last four months and had also warned the police about it. But the police officers of Bhagalpur responded by saying that this was the most efficient way to maintain law and order in the district.

When Arun Sinha met the police officers of Bhagalpur, he clarified that this work is not being done by the police but the general public there and there is no need to shed tears for these so-called killers, robbers and rapists. Arun Sinha returned to Patna and filed the report. His report appeared on the front page of the November 22, 1980 issue of The Indian Express, titled ‘Eyes Punctured Twice to Insure Blindness’.

Arun Sinha says, “There was a threat to my life by publishing this report. Common people came out on the streets in support of the police. He said that the police had done the right thing. For reporting, I had to go to Bhagalpur with a fake identity. When the policemen were suspended, those people also came on the road. People of civil administration were also with him. At that time it became a very strange situation.”

He says, “The whole elite class of Bhagalpur was with him. High rank, upper caste and even lawyers, students and so called journalists. They demonstrated in front of the district magistrate’s office and raised slogans that these policemen are innocent. At that time slogans were being raised all over Bhagalpur ‘Police Janata Bhai-Bhai.’ The reason we got a lot of help was that two factions had also been formed in the police. One section was trying to clear this whole matter, while the other section, which was a little conscious of human rights, was giving us every news of the dark exploits of the policemen. But the line of most of the policemen was that this brutality was done by the public, not by us.

When this matter became public, Chief Minister Jagannath Mishra and DIG (Eastern Range) held the common people responsible for this. Arun Shourie asks, “If common people were responsible for this, then the question arises where did people get acid from? Were the people of Bhagalpur walking around with a bang and acid in their hands? Did people know where and when? The criminals will be caught and they used to be ready with acid and percussion there? Why did the criminals not use their weapons when they were caught by the people? If the common people blinded the criminals then why did the police not catch them? Did they try to find any witnesses to this?”

The government did only one thing and that was to suspend the jail superintendent Das. He was accused that when he reached the jail, he had not made a correct entry about the blind people in the jail register, nor did he make proper arrangements for the treatment of these people. But his real crime was that he introduced Arun Sinha to the blind people.

His suspension order read, “He did not report to the administration about this and gave his version about the blinding of the newspapers.”

But there is no doubt that before the people came to know about it through the newspaper, the high officials of Bihar Police had an idea about it.

Arun Shourie explains, “In July, 1980, DIG (Eastern Range) Gajendra Narayan requested the DIG (CID) to send an experienced police inspector to Bhagalpur to investigate it. Those inspectors report to Gajendra Narayan that the police are forcibly blinding the suspected criminals by planning. That inspector returned to Patna and submitted the same report to DIG (CID) MK Jha. Instead of acting on this report, the officials started pressurizing the inspector to change his report. Sources told Sinha that the DIG who sent him said that the inspector should be immediately called back to the headquarters.

In September 1980, the Inspector General of Police (Prisons), after inspecting Bhagalpur’s Banka Sub Jail and meeting three blinded prisoners, requested the Home Department to set up an inquiry, but the department did not take any action. When the blind people were taken to Bhagalpur Medical College, the doctors there refused to treat them. He also did not accede to the request of Bhagalpur Jail to depute an eye specialist there.

As soon as this news broke, Union Minister Vasant Sathe said that ‘Indian Express’ newspaper is trying to demoralize the police. But Acharya Kripalani strongly condemned this entire operation by holding a public meeting. When the matter was raised in the Parliament, the government initially tried to brush it off by saying that whatever happened is unfortunate but since law and order comes under the domain of the state government, the proper place to consider it is the assembly. not parliament.

Expressing deep sorrow over this entire episode, Prime Minister Indira Gandhi said that she is unable to believe that such a thing can happen in today’s era. The central government directed the Bihar government to request the Patna High Court to take action against the district judge who refused to provide legal aid to these blind prisoners. He also announced that 33 blind people would be given an assistance of Rs 15000 so that they can earn their living from the interest earned from it. Home Minister Giani Zail Singh appealed to the families of the victims not to escalate the matter as it would bring disrepute to India abroad.

Taking cognizance of this entire matter, the Supreme Court ordered to get all these victims investigated at the All India Institute of Medical Sciences, Delhi. He also said that the court cannot do anything to bring back the bodily harm caused to these people, but action should be taken against those who have done so so that such cruelty is never repeated in future.

Arun Shourie explains, “The Bihar government got the identity parade of the police officers involved in this work to show that they were doing something and the people who were completely blind were asked to follow those police officers. Identify who blinded them.

Senior police officers were already sent to important places. DIG (CID) was made the chief of Bihar Military Police and DIG (Bhagalpur) was transferred to the important post of DIG (Vigilance).

When Arun Shourie met Bihar Chief Minister Dr. Jagannath Mishra in Delhi, he asked him, “Misraji, your government could not control law and order. Everyone here says you should resign.” Mishra’s reply was, “Shourie sir, why should I resign? I have taken the moral responsibility, haven’t I.”

Punishment or posting…, what are the rest of the officers saying on the transfer of the IAS couple who walk the dog