Another explosion on the Sun, a geomagnetic storm will hit the Earth on this day, the speed will be 21,85,200 km per hour
Advertisement 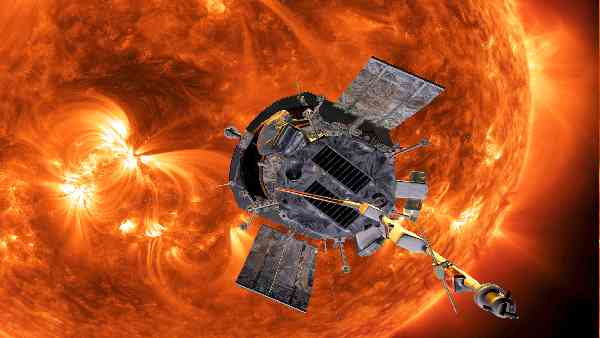 The Sun is becoming very active in the new solar cycle and this has caused a coronal mass ejection (CME), which is moving towards the Earth at a very high speed. The Kolkata-based Center of Excellence in Space Sciences at the Indian Institute of Science Education and Research has predicted that the infinite energy and plasma generated due to this will collide with the Earth. A coronal mass ejection is one of the largest eruptions on the surface of the Sun. Because of this, billions of tons of matter can be dispersed in space at a speed of several lakh miles per hour.

This energy emanating from the sun can pass through different planets, due to which any planet or spacecraft or satellite coming in its path can be affected. When a coronal mass ejection (CME) actually passes through Earth, it can disrupt or completely destroy the instruments on our satellites and Earth’s radio communication network. Our earth has become a witness to these natural events many times.

Geomagnetic storm may hit on Thursday

On March 28, this solar flares (the blazing energy of the Sun) was liberated from the active areas 12975 and 12976 of the Sun. The Center of Excellence in Space Sciences at the Indian Institute of Science Education and Research has said that when these solar flares collide with the Earth’s magnetic field, a coronal mass ejection is likely to cause a moderate geomagnetic storm. According to one of its tweets, ‘Our model indicates a very high probability of hitting the Earth on 31 March at a speed of 496-607 km/s.’ (1 kilometer per second i.e. 3600 kilometers per hour)

The Space Weather Prediction Center at the US National Oceanic and Atmospheric Administration (NOAA) has also corrected the center’s projections and predicted that a G3-class geomagnetic storm will hit Earth on March 31. It has also issued a warning that it could cause surface charging events in satellite parts, increase the drag of low-Earth orbit satellites, and seek solutions to the problems it creates. (pictures above – symbolic)

40 Starlink satellites were destroyed in February

This is not the first incident of a geomagnetic storm colliding with Earth. In early February this year, Elon Musk’s company SpaceX has also come under its grip. Because of this, 40 of their Starlink satellites were destroyed. Then on January 30 last, there was an explosion on the sun and due to this a coronal mass ejection was born. This position was on the Sun for about 4 hours.

Not only this, this center has also told about such a new area on the surface of the Sun, which can cause even more flares in the future. According to this, the AR12975 and AR12976 regions are magnetically linked and are likely to cause an X-class flare. Aurora conditions are likely to occur with effect from Thursday, which can be seen at lower altitudes. Due to this, the power grid and communication networks can also be affected.

‘If a girl wears a hijab, then it is…’, Miss Universe Harnaaz jumped into the hijab controversy, gave a big statement

To win the elections, BJP had reduced the prices of petrol and diesel, now they are telling lies- Mallikarjun Kharge