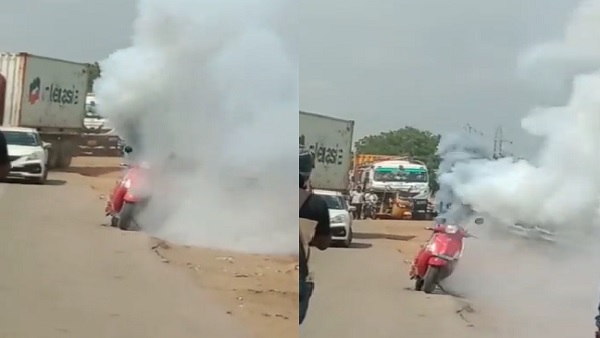 New Delhi, March 30. The trend of electric vehicle is progressing very fast in the country. The central and state governments are also giving various discounts to the people to promote EVs and its effect is also being seen, people are also buying electric vehicles in large numbers, but in the last few days there has been a fire in electric vehicles. Incidents of incidents have come to the fore. The latest case is from Chennai, where an electric scooter caught fire and after that the scooter started burning in the middle of the road.

Where did the incident of scooter burning take place?

According to the information, this incident of electric scooter burning is from Manjampakkam area of ​​North Chennai. An electric scooter caught fire near Mathur toll plaza here, after which the driver immediately left the scooter on the road and made a full video of the scooter burning. This video is now becoming increasingly viral on social media.

According to media reports, 21-year-old Ganesh, who worked in a transport company in Tiruvallur, was going to office on his electric scooter when he saw smoke rising from it. After this, he parked the scooter on the middle of the road. During this, some people also tried to extinguish the fire by pouring water. The name of the scooter which caught fire is being told as Pure EV. Earlier, the EVs in which the incident of fire has come to light, they were also scooters of Pure EV. According to the news of TOI, a statement has been issued on behalf of the company regarding this incident saying that we are analyzing this incident.

Let us tell you that the number of incidents of fire in electric vehicles so far, most of them are from South India. Earlier, a similar case had come to light from Tamil Nadu itself, where an electric scooter of Ola caught fire. Two persons had died in this incident.

Another one…Its spreading like a wild #fire ,
After #Ola , #okinawa #electric scooter from #pureEV catches fire in Chennai.
Thats the 4th incident in 4 days..
The heat is on.#ElectricVehicles #OLAFIRE #lithium pic.twitter.com/jJqWA48CNf

Army will get 15 Light Combat Helicopters, the committee headed by PM Modi approved