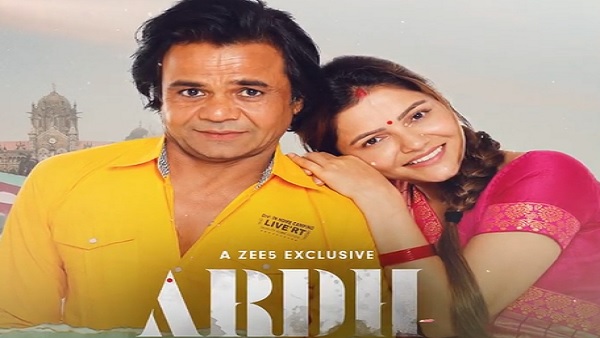 Mumbai, May 18: TV actress Rubina Dilaik has become very popular among the people ever since she wrote the book of Bigg Boss. Rubina has also started being very active on social media. However, now this TV actress is ready to debut in films. The trailer of his debut film ‘Ardh’ has been released today. Rubina’s Ardh film depicts the story of a struggling actor. Rajpal Yadav will be seen in the lead role in this film along with Rubina. Along with this, Hiten Tejwani and Kulbhushan Kharbanda are also playing important roles in this film. The trailer of the film looks great, in which Rajpal Yadav is seen in a unique character. A character he had never played before. Rubina’s character in the film’s trailer also looks quite challenging. Rubina’s fans are looking very excited about her debut film.

Rubina herself shared the trailer of the film
Rubina Dilaik has shared the trailer of her film Ardh on her official Instagram account. In the trailer, actor Rajpal Yadav is seen in the role of Shiva, a theater artist who dreams of becoming an actor in films. However, to run the house due to poverty, he becomes a transgender and asks people for money on signals and in trains. It is clearly visible in the trailer itself that Shiva changes his name and appearance and asks people for money on the signal and somehow runs the family. In this struggling life of Shiva, his wife i.e. Rubina Dilaik is seen accompanying him at every step. The ups and downs of the life of both of them and the struggle of a poor struggling actor have been shown very well in the film’s trailer.

This film will be released on June 10
Rubina’s debut film Ardh will be released on June 10 on the OTT platform Zee5. This is the first time for Rubina to work in the film. In such a situation, he is very excited about this film. At the same time, this is a very challenging role for Rajpal Yadav as well. According to the trailer, the entire film seems to revolve around Rajpal Yadav. The film is directed by Palash Muchhal.

Aashram: ‘Bhopa Swami’ is the owner of so many crores in real life, earlier did not live for food money