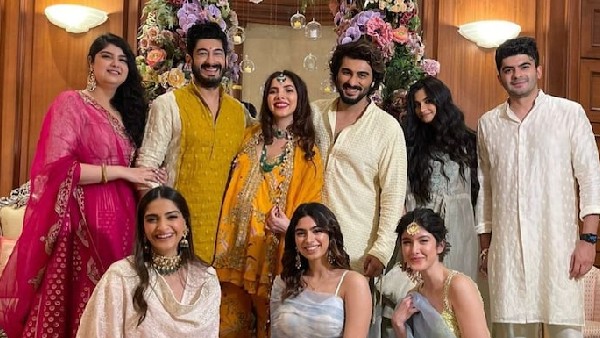 Arjun Kapoor is often seen playing the role of the perfect brother in his family. In this picture, Arjun, Rhea and Sonam had come to see Shanaya Kapoor at the hospital at the time of her birth. Arjun is more of a friend to his siblings and is often seen giving career tips to his younger sisters and brother Jahan.

Arjun Kapoor was also seen playing the role of perfect brother on Sonam Kapoor’s wedding. While recently Arjun Kapoor was posing in front of the cameras that everyone started calling him Mama because his sister Sonam Kapoor has announced her pregnancy. Hearing that, even Arjun Kapoor could not stop his happiness and left smiling.

Arjun Kapoor is affectionately called Chacha by everyone in his family. This naming was done by his uncle Anil Kapoor who started calling Arjun as Chachu. Because, Arjuna, was his first nephew. After this, slowly Riya Kapoor made Chachu’s uncle and now Riya, Sonam and Harsh call him Chacha.

After the death of Sridevi, Arjun Kapoor came closer to Boney Kapoor and Sridevi’s two daughters. After this, Arjun and Anshula joined Janhvi and Khushi as a family and since then these four siblings have won hearts with their strong relationship.

Jhanvi and Arjun together

Significantly, the fans were very happy to see Arjun and Janhvi for the first time on Koffee With Karan. There was no artificiality or pretense in the chemistry of both and this thing touched the hearts of the fans. While both were seen teasing each other in the name of Ishaan and Malaika, Arjun appeared like an elder brother the whole time.

from brother to brother

Arjun told in an interview that Anshula calls him brother. So when Janhvi and Khushi started calling him Bhaiya, initially they felt very strange. But slowly he got used to it. After the death of Sridevi, Arjun Kapoor was seen opening up about himself and Janhvi in ​​an interview. He had said that whatever misunderstandings were there between us, we have resolved them by sitting together.

At the same time, Arjun and Anshula became each other’s strength after the death of their mother, Mona Shourie. He had given the same power to Khushi and Janhvi together. Arjun Kapoor is seen standing by Anshula’s every achievement.

Shanaya Kapoor is the youngest sister of Arjun Kapoor. Shanaya is going to make her Bollywood debut and before that, Arjun has groomed her for Bollywood several times. Shanaya’s mother, Maheep Kapoor, is very close to Arjun and the two share more of a friendship than an aunt’s nephew. That’s why Maheep also often shares problems related to Shanaya’s debut with Arjun.

Video: Many stars including Aamir, Ranbir, Alia, Kareena came to welcome Rishi Kapoor on screen for the last time