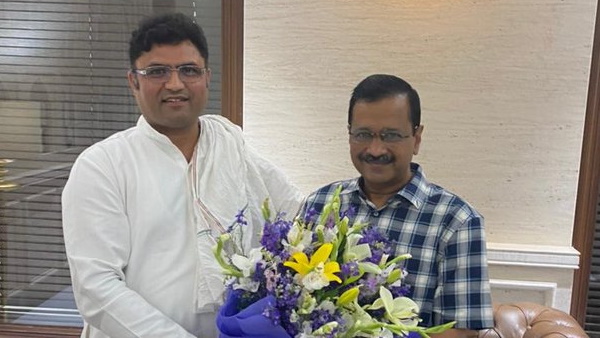 Ashok Tanwar tweeted that the work being done in public interest under the able leadership of popular leader Shri Arving Kejriwal ji has inspired me to join the common man. I will try my best to live up to the confidence of the party leadership by continuing to raise the voice of the people. On this, Kejriwal said that welcome to the Aam Aadmi Party family, Ashok ji. Your political experience from student politics to Parliament will certainly prove to be of great help to the party organization in Haryana and across the country.

Ashok Tanwar had left the Congress in the year 2019. Ashok Tanwar has also been the President of Haryana Pradesh Congress Committee. He has also served as the President of the Indian Youth Congress and the student wing of the Congress, NUSI. Tanwar later joined Mamata Banerjee’s party Trinamool Congress (TMC). Now Tanwar has joined AAP. After AAP’s resounding victory in the Punjab Assembly, many local leaders of Congress, BJP and other parties have joined the Kejriwal-led party in Haryana.

Tanwar’s joining is seen as a big success for the Aam Aadmi Party, as the party is trying to increase its base in the state in view of the proposed assembly elections in Haryana in 2024. On the other hand, former Indian Police Service (IPS) officer and Bengaluru resident B Bhaskar Rao joined the Aam Aadmi Party in Delhi on Monday.

‘A scathing attack on Raj Thackeray, praise for his nephew’, what did Sharad Pawar say about MNS chief?