Asian Cup qualifiers: In the last minute game, India snatched the match from Afghanistan, won 2-1 on the basis of Chhetri-Samad
Advertisement 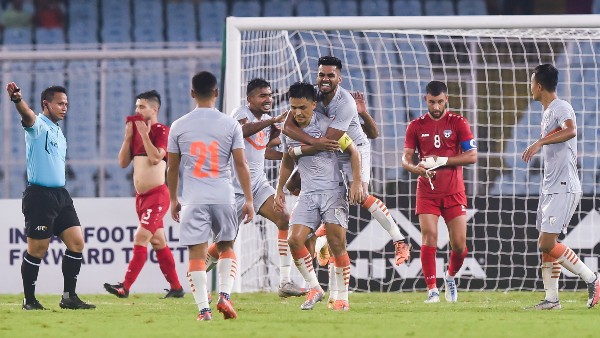 New Delhi. The FC Asian Cup Qualifiers 2023, being played at the Vivekananda Yuva Bal Bharati Kariangan (VYBK) Stadium in Kolkata, continued Indian football for the second successive match. India had defeated Cambodia 2-0 in their first match played on 8 June, after which they had to play their second match against Afghanistan in Group D of the Asian Cup Qualifiers. In this match, the Indian team came back in a dramatic fashion after being behind for almost 85 minutes of the match and in the last minutes turned the dice of the match to give the team a 2-1 victory.

Sunil Chhetri (86th minute) and Sahal Abdul Samad (90+2 minute) scored the goal for India in this win against Afghanistan. The match started in a very enthusiastic way where the Indian team kept Afghanistan on the corner continuously in the first 10 minutes but despite this, the Afghan team managed to defend.

Sunil Chhetri came close to opening the Indian team’s account before the interval, where Manveer Singh hit a cross from the right side and Chhetri took the ball through the Afghan defender Haroon Amiri inside the box and with a scissor kick. Wanted to score through, but unfortunately it did not connect and India’s account could not be opened. During this, Sandesh Jhingan of India was injured in the calf.

After the break, the Afghanistan team appeared in the mood to win the match and kept the Indian team on the backfoot. However, neither team failed to open the account before the last minute. Sunil Chhetri ended the goal drought for India in the 86th minute after scoring no goals for 85 minutes and opened his team’s account by scoring a free kick from Ashike Kurunian. However, the joy lasted only two minutes as Zubair Amiri scored the equalizer for Afghanistan in the 88th minute.

Read more: Darryl Mitchell hit such a six that the ball fell straight into the beer glass, later apologized to the fan

In the 89th minute, Sunil Chhetri and Manveer Singh were replaced by Udanta Singh and Sahal Abdul Samad. On the basis of Kurunian, the Indian team consistently managed to trouble the defenders of Afghanistan. After 90 minutes of play, Sahal Abdul Samad scored from the left corner in the extra two minutes to give India a thrilling win.

Wimbledon: Money will rain on players, know how much the winner of the title will get