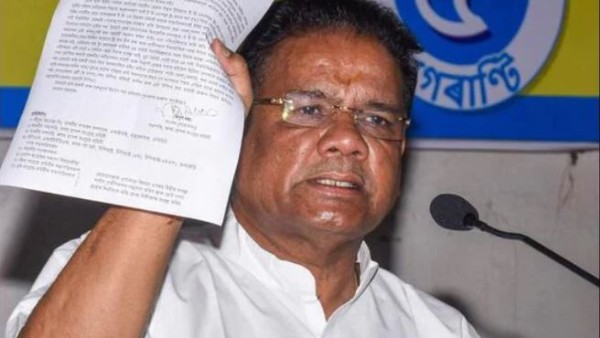 Dispur, 30 March. The Assam Congress has accused the All India United Democratic Front (AIUDF) of selling five of its MLAs to benefit the ruling BJP and its allies in the election to two Rajya Sabha seats. This comes days after the AIUDF promised support to Congress’ Ripun Bora.

Voting for two seats is to be held on Thursday
Voting for two Rajya Sabha seats is to be held on Thursday. The BJP has fielded Pabitra Margherita in one seat while its ally United People’s Party Liberal has fielded Ravangwara Narzari in the other. One legislator each from the Communist Party of India (Marxist) or CPI (M) and the Raizar Dal is supporting Bora.

AIUDF MLAs sold to BJP
Assam Congress chief Bhupen Kumar Bora said, “We have joined hands with AIUDF for the elections to show opposition solidarity against the BJP, but a few days back AIUDF chief Badruddin Ajmal expressed doubts on the integrity of our five MPs and said that they Can go with BJP. I can guarantee that all 26 Congress MLAs and one MLA each from CPI(M) and Raijar Dal will vote for our candidate. But five AIUDF MLAs have been sold to the BJP and Ajmal is directly involved. He tried to mislead everyone by accusing Congress MPs.

Bora accuses AIUDF of betrayal
Bora accused the AIUDF of betrayal. He said that the AIUDF tried to field its agent in the elections without asking the Congress and tried to blackmail them. He said that the election agent had informed me a few days back through my general secretary that he would not vote for the Congress candidate. A candidate needs 43 votes to get elected in Assam. The BJP and its allies have 83 votes out of 126 in the assembly. That is, BJP candidate Margarita can easily get elected.

AIUDF denies the allegations
AIUDF leader Aminul Islam rubbished the allegations saying that we were hearing about differences within the Congress over Bora’s selection. Some Congress leaders are trying to defeat him. He said the AIUDF had earlier agreed to support the Congress in return for support in the next Rajya Sabha elections. We are committed to our support and all 15 MLAs will vote for Bora on Thursday. The results will reveal who the real traitor is.

no unity in opposition
At the same time, BJP leader Dilip Saikia said that the allegations show that there is no unity among the opposition parties. He said there are several factions within the Congress and despite a deal, he doubts the AIUDF. He said that the BJP does not indulge in immoral acts like selling or buying votes. Our Chief Minister has good relations with many opposition MPs. We are absolutely sure that both our candidates will win.

Petrol diesel is getting expensive, can the price be lower than Russian oil?

‘If a girl wears a hijab, then it is…’, Miss Universe Harnaaz jumped into the hijab controversy, gave a big statement