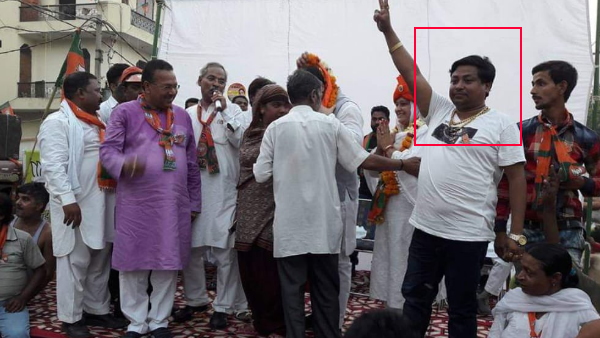 New Delhi, April 19: A day after Delhi BJP leaders claimed links between Jahangirpuri violence accused Mohammad Ansar and the Aam Aadmi Party, AAP retaliated. AAP MLA Atishi on Tuesday shared pictures on Twitter, claiming that the accused can be seen with leaders of the saffron party. Atishi claimed, “Ansar, the main accused in the Jahangirpuri riots, is a BJP leader.

Atishi tweeted, ‘The main accused of Jahangirpuri riots, Ansar is a BJP leader. He played a major role in getting BJP’s candidate Sangeeta Bajaj to contest and plays an active role in BJP. Atishi further wrote, It is clear from this that BJP has got the riots done. Atishi has also shared some pictures from her official Twitter handle. In these pictures, Ansar, the main accused of Jahangirpuri violence, is seen on the stage with BJP leaders. In one of the pictures, Ansar can also be seen showing hands to people.

Earlier, Atishi had blamed the BJP for the violence in Jahangirpuri. MLA Atishi said that BJP Delhi President Adesh Gupta has given a message across the country that he is with goons and lafans by honoring the Lafans who attacked Chief Minister Arvind Kejriwal’s house two days ago. He said that if the Jahangirpuri violence case will also be investigated, then it will be known that the rioters are from the BJP.

Atishi said that BJP gets riots done. Yesterday our leaders also took out a procession, the whole atmosphere was peaceful. The Chief Minister himself took part in organizing the Sundar Kand, there was no problem, but when BJP takes out Shobha Yatra, its people are involved then riots happen. In a letter to Aam Aadmi Party (AAP) supremo and Delhi Chief Minister Arvind Kejriwal on Monday, Delhi BJP spokesperson Praveen Shankar Kapoor had asked him to expel Ansar from the party.

Delhi Police has sent preliminary report on Jahangirpuri violence to the Ministry of Home Affairs. At the same time, the violence-affected area in Jahangirpuri is under tight security. Police personnel have been deployed along with excessive barricading and paramilitary forces. The Crime Branch of Delhi Police has prepared a special plan for the investigation.