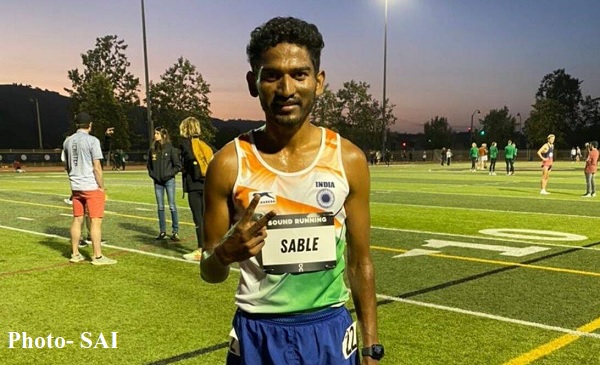 New Delhi, May 7: India‘s Avinash Sable has broken Bahadur Prasad’s 30-year-old record in 5000m. The 27-year-old runner from Maharashtra set a new national record with a time of 13:25.65 at the Sound Running Track Meet in San Juan Capistrano, USA.

Sable comes from a humble family in Beed district of Maharashtra and is an army man. He broke the record of 13:29.70 set by Bahadur Prasad in Birmingham in 1992. This record lasted for a long time.

Sable finished 12th in the meet and is training in the USA for upcoming international events.

Sable also holds the national record in the 3000 m steeplechase and has competed in the Tokyo Olympics. The sprinter clocked 13 minutes and 25.65 seconds to finish 12th in the American meet.

Sable is known to have broken his own 3000m steeplechase national record several times. He did so for the seventh time during the Indian Grand Prix 2 in Thiruvananthapuram in March with a timing of 8:16.21s.

He also set a national record of 8:18.12 seconds during the Tokyo Olympics. He has already qualified for the World Championships to be held in Eugene, USA from July 15 to 24.

Also read- All the obstacles in the selection are set to fly in the storm of 150kph, the legend said a big thing on Umran

Asian Games 2022 postponed, decision had to be taken due to Kovid – report