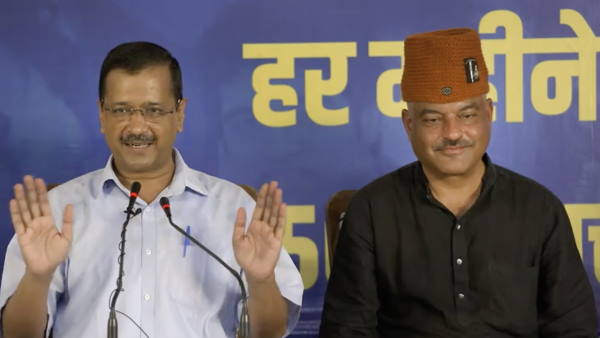 Shimla, May 25. The Bharatiya Janata Party is troubled by the growing influence of the Aam Aadmi Party in Himachal Pradesh. Colonel Ajay Kothiyal, who joined BJP in Uttarakhand last day, can become a support for BJP in Himachal elections. The BJP has already made preparations to make Colonel Kothiyal the main face of the campaign. Kothiyal may have himself forfeited the bail from the Gangotri assembly seat, but after his joining the BJP, the BJP will use him under a well-planned political strategy. Since the borders of Himachal and Uttarakhand are interlinked and the people of both the states are getting mixed.

Lack of leader of military background in Himachal in BJP
At the same time, like Uttarakhand, Himachal is also a military dominated area and Himachal BJP currently lacks a leader from military background. Therefore, Colonel Kothiyal can prove to be very useful for the BJP in the Himachal Assembly elections. The BJP’s first advantage of bringing Colonel Ajay Kothiyal into the party is to send a message to the military and ex-servicemen families in military-dominated Uttarakhand that it values ​​people from military backgrounds. He also played this gamble to strengthen his agenda of nationalism. This is the message the party wants to give in adjoining Himachal Pradesh. Assembly elections are to be held in the state by the end of this year. The party has entered election mode. The central leadership is making an election strategy for the return of the BJP in Himachal. Colonel Kothiyal’s joining BJP is being considered as part of this strategy. Through him, the party will also target the Aam Aadmi Party.

BJP will challenge AAP through Colonel Kothiyal
Actually, the Aam Aadmi Party is gearing up to contest the elections in Himachal. The neighboring state of Punjab has the same influence on Himachal as Uttar Pradesh has on Uttarakhand. Aam Aadmi Party is in government in Punjab. On the strength of its government, AAP is preparing to turn the electoral environment in Himachal in its favor, but the ruling BJP can give an answer to AAP’s election attacks by fielding Colonel Ajay Kothiyal in the campaign field. Kothiyal was the CM face of the Aam Aadmi Party in Uttarakhand. But, after his defeat, Kothiyal is now telling his biggest mistake to join the Aam Aadmi Party. Obviously, when he repeats the same thing among the voters of Himachal, it will not be easy for you to answer it. Like Uttarakhand, Himachal is also considered military-dominated. In both respects, Col Kothiyal appears useful to the BJP.

Colonel Kothiyal turned from AAP leader to BJP leader
Colonel (Retd) Ajay Kothiyal, who was a contender for the post of Chief Minister of Aam Aadmi Party (AAP) in the Uttarakhand Assembly elections, has joined the Bharatiya Janata Party on the previous day. He joined BJP in the presence of CM Pushkar Singh Dhami and senior leader Madan Kaushik. Regarding his resignation, the colonel had said that the resignation has been given keeping in mind the sentiments of ex-servicemen, ex-paramilitary, elderly, women, youth and intellectuals. Colonel Ajay Kothiyal led the Everest expedition twice. Played an active role in Kedarnath reconstruction and governed Nanda Devi Rajjat ​​2014. Executed many army campaigns, connected youth through Youth Foundation. Ajay Kothiyal had killed 17 dreaded terrorists while in the Indian Army. Since then he came in discussions.

Mehbooba should tell which BJP leader raised the issue of which temple in which court: Home Minister Anil Vij

RCP Singh broke silence on the rift with Nitish Kumar, replied even after JDU left the BJP