BJP's new campaign after discussion on tea, will create atmosphere by discussing tiffin with farmers
Advertisement 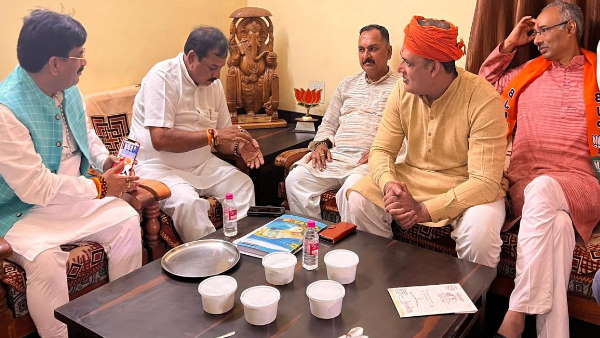 Idea of ​​tiffin meeting is not new, sometimes Modi does such meetings

On May 30, the Modi government is going to complete its eight years. It is believed that from this day BJP will start preparations for its mission 2024. But before that his eyes are on the elections of Chhattisgarh, Madhya Pradesh, Rajasthan, Gujarat. BJP has fixed programs for its various fronts and cells. Under this scheme, the workers of BJP Kisan Morcha are organizing tiffin meetings in rural areas to help farmers till the booth level. Apart from BJP workers, farmers are also being invited to these meetings.

BJP’s main campaign can be proved in Chhattisgarh

In Chhattisgarh, the Congress had formed the government by promising to give a bonus of Rs 2500 on paddy including loan waiver to the farmers. Bhupesh Baghel government kept this promise after coming to power. Most of the schemes including Gaudhan Nyay Yojana of Bhupesh Baghel government are related to farmers and rural background. Therefore, the big challenge for the BJP in Chhattisgarh is that it can make its vote bank by again attracting the farmers to the BJP. The discussion campaign on tiffin of BJP Kisan Morcha becomes very important from the point of view of Chhattisgarh.

Recently, BJP Kisan Morcha National Minister Bajrangi Yadav held a tiffin meeting with farmers, panchayat representatives and BJP workers in Durg, Chhattisgarh. State Vice President of BJP Kisan Morcha Gaurishankar Shriwas told that Bhupesh Baghel government of Chhattisgarh is continuously cheating with the farmers. We explained to the farmers how the Congress government is pretending to be friendly to the farmers. He said that the BJP is also informing the farmers and panchayat representatives about the works being done by the Modi government at the Center for the welfare of farmers through tiffin meetings.

KCR’s retaliate on PM’s statement on familyism, said – there will be a change in the center, soon you will get sensational news

20 years of ISB: PM Modi said – India is the fastest growing economy in the group of G-20 countries