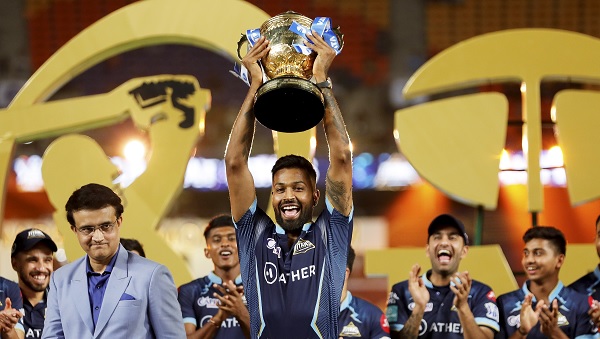 The truth is Hardik won his fifth IPL trophy when he led Gujarat Titans to victory in their first season on Sunday. Hardik impressed with bat and ball as GT defeated Rajasthan Royals by 7 wickets in a one-sided final in Ahmedabad. Gujarat Titans is really a hard losing team under Hardik’s captaincy.

Even though it was the first trophy as captain

A regular appearance for 5-time IPL champions Mumbai Indians, Hardik scored 487 runs and took 8 wickets throughout the season, including 3 for 17 in the final against Royals. Hardik Pandya’s knock of 34 off 30 balls proved to be crucial in Gujarat Titans’ chase of 131 runs. It was Hardik’s first IPL trophy as captain, but this all-rounder is no stranger to winning the IPL championship.

wish came true in this season

Hardik had expressed his desire to achieve the same success as Dhoni before the start of the season. This wish was fulfilled in this season and in the coming season GT will come again with great hope.

Third captain to win man of the match

Apart from this, Hardik was adjudged man of the match for his all-round performance in the final match. He became only the third captain after Rohit Sharma and Anil Kumble to win the award in an IPL final. While Rohit won the award in IPL 2015, Anil Kumble in 2009.

Not only the captain, but the coach also created history, great surma could not do amazing things like Ashish Nehra

IPL’s big season ends, many players left an impression, which star got which award