Chennai almost out of the race for playoff, RCB register a spectacular win
Advertisement 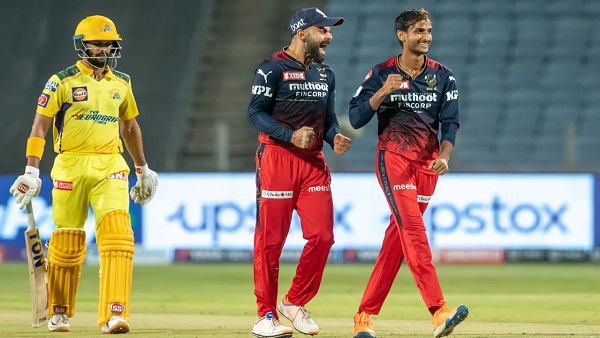 Pune. In the 49th match of the Indian Premier League (IPL) 2022, Chennai Super Kings lost to Royal Challengers Bangalore by 13 runs. In reply to 174 runs from Bangalore, Chennai team could score only 160 runs for the loss of 8 wickets. With this, Chennai’s hopes of going to the playoffs are almost over. This was Chennai’s 7th loss in 10 matches. On the other hand, Bangalore has won 6 out of 11 matches. She has come in fourth place in the points table.

Chasing 174 for their second consecutive win of the season, defending champions Chennai Super Kings failed to form a solid opening partnership of Devon Conway and Ruturaj Gaikwad. Devon Conway scored another half-century, but his innings of 56 runs in 37 balls did not work due to lack of support from other batsmen. Moeen Ali hit 34 off 27 balls but MS Dhoni scored only 2 runs while Robin Uthappa, Ambati Rayudu and Ravindra Jadeja also failed.

MS Dhoni, playing his 200th IPL match for Chennai Super Kings, won the toss and elected to bowl against Royal Challengers Bangalore. Faf du Plessis, who came to open for Bangalore, was looking aggressive, but he was dismissed after scoring 38 runs. Glenn Maxwell could score 3 runs. Virat Kohli became the second victim of Moeen Ali and went on to make 30 runs in 33 balls.

Mahipal Lomror and Rajat Patidar tried to increase the team’s score. While Lomror could score 42 runs in 27 balls, Rajat scored 21 runs. Dinesh Karthik scored an unbeaten 26 off 17 balls as Bangalore scored 173 for 8 in 20 overs. Mahesh Thekshana took three wickets for Bangalore in the 19th over. For Chennai, Mahesh took 3 wickets for 27 runs. Moeen Ali took 2 wickets for 28 runs. Pretorius got 1 wicket.

Big record was recorded in the name of Kohli, became the first batsman to do such a thing