Chhattisgarh: You have entered the field of saving Hasdev Aranya, will siege the CM House for not stopping the felling of trees.
Advertisement 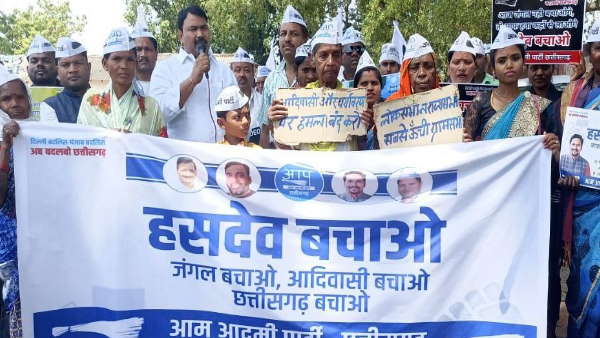 Approval of coal mine will have disastrous consequences

During this, the leaders of the Aam Aadmi Party said that even after warnings from environmental experts, the Congress government of Chhattisgarh has approved the Parsa coal mine. This coal mine has been allotted to another Congress state Rajasthan. AAP State President Komal Hupendi said that only on the behest of the government, the Wildlife Institute of India, an organization of the Government of India, has studied the Hasdeo Aranya and submitted its report last year itself. The WII, in its report, had clearly stated that sanctioning a coal mine in the Hasdeo forest area would have disastrous consequences, which would be impossible to stop.

State President Komal Hupendi said that in Hasdeo Aranya’s village itself, Congress leader Rahul Gandhi had said before the assembly elections that if the Congress government came, he would stand with the tribals and would not allow coal mines to open, but after the formation of government in Chhattisgarh. After forgetting everything, approval has been started for the mines. Rahul Gandhi is making similar promises in other election states, it is very wrong.

Destruction of forests will increase the temperature: Priyanka Shukla

AAP spokesperson Priyanka Shukla said that according to the report of the Wildlife Institute of India, the acceptance of a new mine in the area of ​​Hasdev Aranya, which is called the lungs of central India, will not only destroy the forest, elephants, tigers, leopards, bears living in the forest. Just like the life of animals will also come in danger and at the same time elephant human conflict will intensify. According to the same report, due to climate change, the destruction of the densest forests of Central India, which is being hit by the weather, will increase the temperature and there is a possibility of drought due to the decrease in water storage.

You will gherao the CM House on May 21

AAP leaders said that Chhattisgarh government should immediately get the fake Gram Sabha of Parsa village investigated and stop felling of trees in Hasdeo forest after taking cognizance of the report of Wildlife Institute of India. Apart from this, the rule of the fifth scheduled area of ​​the state should be followed. If the government does not accept these three demands of ours, then the common man will struggle at every level. The Bhupesh government should take all these facts into consideration and fulfill the demands of the tribals. If the government will not take the voice of the common man seriously, then on May 21, 2022, the party will gherao the Chief Minister’s residence in Raipur.

‘If Adesh Gupta does not remove the encroachment, he will go with the bulldozer to his house’, warns AAP