Chintan Shivir: Retirement formula in 65 years, if implemented, all these Congress leaders may be on leave
Advertisement 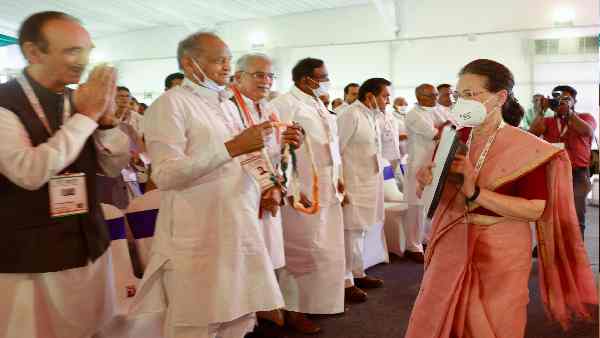 Recommendation for retirement of Congressmen in 65 years

According to the report of news agency ANI, the Youth Committee of the Congress, headed by Punjab State Congress President and former Youth Congress President Amarinder Singh Brar, has given a formula for the party leaders to retire in 65 years. Sources say that the Congress Working Committee (CWC) has decided to implement this recommendation after the 2024 Lok Sabha elections. Party’s interim president Sonia Gandhi also agrees with the recommendation of the party’s youth committee for retirement at 65 years, but it is better to postpone it for two years. This Congress Chintan Shivir has been organized in Udaipur, Rajasthan, which has happened after 9 years. Apart from the Gandhi family, about 430 leaders of the party have participated in this camp.

In this camp, the party has prepared ‘6 draft resolutions’, which have been submitted to Sonia Gandhi by the convenors of the 6 committees. These committees were formed to discuss various topics, including politics, organization, farmer-agriculture, issues related to youth, social justice, welfare and economy. In this Chintan Shivir, the way was also cleared for giving preference to leaders below 50 years of age, for whom reservation has been announced. But, till the 2024 elections, senior leaders have been given time by the party. In this camp, the party president has stamped many big decisions, but the implementation of a major decision has been postponed for the time being. This is the issue of fixing 65 years of retirement age in the party, on which Sonia also agreed. But, a commotion started over it.

Sonia somehow postponed the decision till 2024

There was a long debate on the issue of retirement in 65 years and it was finally decided that it is not the right idea to implement it in a hurry. Especially when the bad days of the party are going on, it will not be right to show the way home to the big leaders, because many senior leaders are giving leadership in their states. In the end, after much discussion, it was decided that instead of implementing this proposal immediately, it should be postponed till the 2024 Lok Sabha elections and after that it should be implemented gradually. However, the appointment of 50 per cent youth leaders to positions within the organization is generally agreed upon by all senior leaders.

These leaders may be discharged on the 65th formula

If the Congress party had implemented the retirement formula now in 65 years, then the leave of all its big leaders was fixed. The first among them is party president Sonia Gandhi herself, who, after handing over the post of president once to her son due to age and health reasons, is being forced to take over again since 2019 by becoming the interim president. Apart from these, leaders who may have to sit at home in the 65-year formula include Bhupinder Singh Hooda from Haryana, Kamal Nath and Digvijay Singh from Madhya Pradesh and Pratibha Virbhadra Singh from Himachal Pradesh. All of them are above 65 years of age. Apart from these, leaders like Rajasthan Chief Minister Ashok Gehlot, P Chidambaram, Ghulam Nabi Azad, Anand Sharma, Mallikarjun Kharge and Pawan Bansal are also coming under this purview.

Interestingly, out of these, Pratibha Virbhadra Singh in Himachal Assembly elections to be held this year, Gehlot and Kamal Nath are also contenders for the chief minister’s post in their respective states in next year’s Assembly elections. The party has fixed the deadline of 2024, when the Haryana Assembly elections will also be held and Hooda has not given up hope of becoming the CM again. However, these leaders have a time of two years, but even after that, to what extent the party will be able to implement it, it will remain a big question.