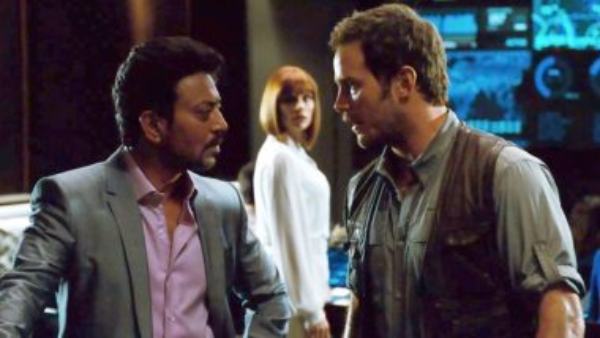 Jurassic World Dominion, The Colin Trevorrow’s directorial, also the sixth movie in the science fiction franchise is all set to release in coming weeks. During promotions, Chris recently opened up about his Bollywood co-star Irrfan Khan.

Chris who plays Owen Grady in the

World
The franchise worked with Irrfan in 2015. Recalling his experience the Hollywood star called the late actor an elegant man. Chris Pratt spoke highly of Irrfan Khan’s aura, he said, “just such an elegant man… like, down to his fingernails. There was just an elegance about him. He was also so powerful.”

For the unversed, Irrfan in the film was seen playing Simon Masrani, CEO of the Masrani Corporation that owned the theme park. “It’s really a rare combination for there to be such strength in softness. And that’s what I would call elegant – he could do very little and still, he would be doing so much,” Chris was quoted by ANI.

He further added, “Just by his sheer presence, and his sheer charisma, that he would bring to a role. One tiny flick of an eyebrow, or one tiny little move, was so powerful.”

After fighting a two-year battle with cancer, Irrfan succumbed to the disease in April 2020. He was last seen on the big screen in 2020 release Angrezi Medium, and won hearts across the world with his performance.

Coming back to the movie,

Jurassic World Dominion
will open after the events of its previous release,

Jurassic World: Fallen Kingdom, The film is set to take place four years after the backdrop of the destruction of Isla Nublar. In this new world, humans attempt to coexist with dinosaurs and try to create a balanced world.