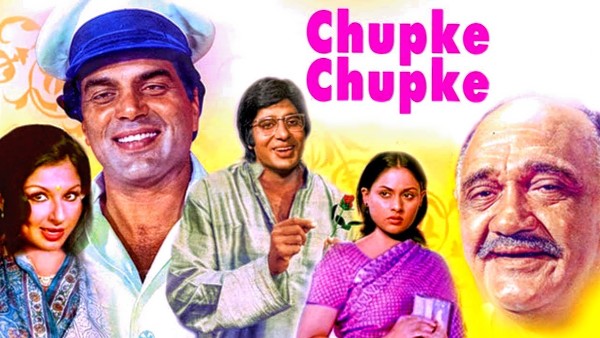 Rajkumar Rao will be Dharmendra?

The discussion of this film has been going on for the last two years and ever since the reports of this film have come out, the cast of the film has also been discussed. Rajkummar Rao had confirmed in some interviews that he will play the role of Dharmendra in the film while the hunt is on for his Amitabh Bachchan. However, Bhushan Kumar has not given any information about the starcast of the film.

Vicky Kaushal will be Dharmendra

While Rajkummar Rao’s name was linked to Dharmendra’s character in the film, it was believed that Vicky Kaushal was approached for the role of Amitabh Bachchan in the film. Now Vicky has said yes to the film or whether he will say yes to this film or not, for this, for the time being, we will have to wait a little longer.

Chupke Chupke is one of the few Hrishikesh Mukherjee films that you will never get bored watching. Nor will I ever stop laughing. Apart from this, this film was the best example of Situational Comedy where no one used to do comedy but whatever was happening in life with Pyare, Sulekha, Vasudha, Jijaji became comedy. Let us remember some very funny scenes related to this film. Luv Ranjan is producing the film with T-Series and he wants to write it himself.

Significantly, the history of remake films in Bollywood has not been very good. Remakes of Hindi films have already been made in Bollywood. And his score has always been 50 percent. That is, the chances of the film being a hit and a flop remain equal. While Bol Bachchan was a hit remake of Amol Palekar’s Golmaal, Ajay Devgn’s Himmatwala and Sooraj Pancholi’s Hero were flop remakes of the same name.

It is worth noting that remaking is not that easy either. Many remake films were announced in Bollywood but could not be made. At the same time, work started on the remake of many films but they could never be announced. These include Raat Aur Din remake with Aishwarya Rai, Chhoti Si Baat remake with Ayushmann Khurrana, Woh Kaun Thi remake with Deepika Padukone, Chaalbaaz remake with Shraddha Kapoor.

Hrishikesh Mukherjee’s famous film Chupke Chupke was released on 11 April 1975 and the film’s release has completed 47 years. The place where the film was shot is currently Amitabh Bachchan’s bungalow, Jalsa. Amitabh Bachchan bought this house and got it built back. At that time it was the bungalow of producer Ramesh Sippy. The comic timing of Amitabh Bachchan and Dharmendra is praised in this film and Luv Ranjan has mastered the comic timing.

After the flop of Jersey, Shahid Kapoor will return in Kabir Singh avatar, the film’s sequel is final