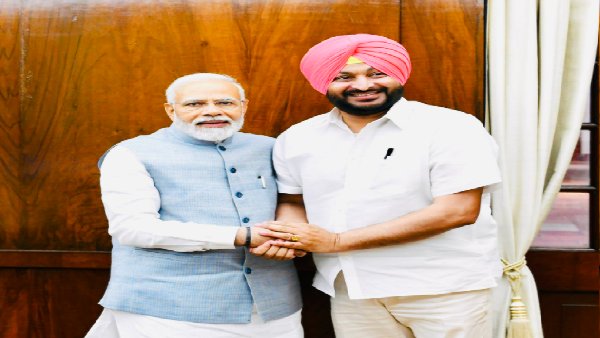 New Delhi, 4 April. After the humiliating defeat of the Congress in the Punjab Assembly elections, there is a situation of crisis in the party. However, the party high command had spoken of the unity of the Congress in the CWC meeting. At the same time, now senior leader of Ludhiana Congress Ravneet Singh Bittu has met Prime Minister Narendra Modi in Delhi today. After which the market of speculation has become hot. On behalf of Bittu, it was said that he has discussed the issues of Punjab with the PM.

Congress had suffered a crushing defeat in the assembly elections of five states. Since then, mutual discord emerged between the leaders of the party. A high-level meeting of the party was convened in a hurry on behalf of the Congress high command and efforts were made to manage everything. Despite this, when senior Congress leader Ravneet Singh Bittu met Prime Minister Modi, the earlier speculations about the Congress camp started being discussed again.

Senior Congress leader Ravneet Singh has said about the meeting with the PM that he met the PM to discuss Punjab issues. Putting to rest speculations about Ravneet joining the BJP, sources close to him denied this. If people trusted by Ravneet are to be believed, they are not joining the BJP. He said that the Prime Minister wants him to fight with the Aam Aadmi Party in Punjab.

Who is Ravneet Singh Bittu?
Ravneet Singh Bittu is the leader of Congress. In 1995, his grandfather, former Chief Minister Beant Singh, was assassinated. After which he actively entered politics. He is more known as a Hindu face. After meeting PM Modi on Monday, he posted a picture on social media in which it was written that today met Hon’ble Prime Minister and discussed the issues of Punjab.

Ravneet is considered close to Rahul Gandhi
Ravneet Bittu is an active leader of Congress. He is considered close to Rahul Gandhi. His MP from Ludhiana, Bittu, has been angry with the Congress for some time. The reason for this is believed to be that the Congress is not giving wings to his political ambitions in Punjab. He is not being nominated for the post of Chief Minister or State President. Ravneet is known to be critical of Sidhu, former Chief Minister Charanjit Singh Channi and Amarinder Singh.

Calling AAP MLA and said – I will shoot you in 2 days, Punjab Police is looking for