Congress will ask for both votes and notes in 2024! Know what is CPM fund?
Advertisement 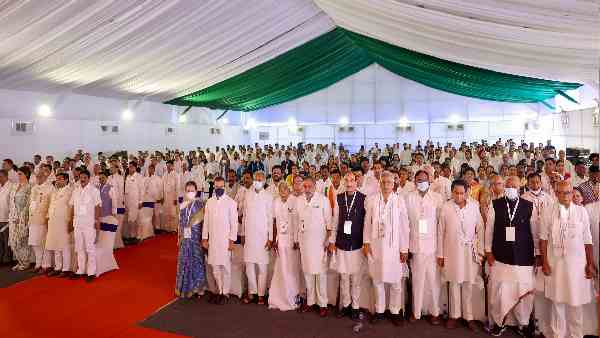 In 2024, Congress will ask for both votes and notes!

It is being said that before the 2024 elections, the Congress is currently facing a severe fund crisis. According to a report in The New Indian Express, the party is thinking of adopting the Kerala model of the Left to face this financial crisis. There the ruling party raises most of the party funds from house to house and in return it distributes donation slips. This idea has been suggested to the Congress by former Kerala Pradesh Congress President Ramesh Chennithala and it has also been discussed in the recently concluded Chintan Shivir in Udaipur, Rajasthan. Congress party sources say, “It is being seriously considered. There are a few things like how it can be implemented, how the fund is managed and transparency etc. This will be discussed in the Task Force 2024 meetings.

What is the condition of the Congress treasury?

According to the official audit report submitted by the Congress to the Election Commission, a sharp decline in the income of the Congress party has been reported. According to this, the income of Congress has decreased by 58% in FY 2021. Meaning, in 2020, the party had an income of Rs 682.2 crore, while in the last financial year it has come down to just Rs 285.7 crore. At the same time, in the financial year of 2019, the party’s income was Rs 918 crore. However, the year of declining income was also hit by the corona pandemic and this fact cannot be ignored.

Why did the fund crisis arise in Congress?

It is being said that this kind of financial crisis on the Congress has come due to the death of Sonia Gandhi’s political secretary and party treasurer Ahmed Patel. Because, it is said about him that he did not allow the party treasury to be empty through corporate and other contacts. The responsibility of jugaad of funds in the party has also been in the hands of former Chief Minister and party president of Madhya Pradesh, Kamal Nath, but due to the strictness of the Modi government, the matter of decline in this income is also coming to the fore.

What is CPM’s Bucket Collection Fund?

According to the information, most of the CPM’s earnings depend on its Kerala unit. Because, now the government is left here by taking it to the left. The joke is also prevalent within the ruling party in Kerala that the central unit of the party relies on Kerala for funds. A general rule of the party is that 70% of its funding should be through door-to-door campaigns and mass-contact, known as ‘bucket collection’. Congress is seeing this same trick beneficial for itself as well.

Rs 5 crore was raised from bucket collection in two days

However, the CPM’s fund-raising method in Kerala has also been criticized and questions have been raised within the party itself. In 2013, the CPM’s Kerala unit raised Rs 8 crore to set up the Harkishan Singh Surjeet Bhawan and the EMS Resource Center within just two days. Out of this 8 crore, Rs 5 crore was deposited through bucket collection and the remaining Rs 3 crore was received with the support of party members.

Bhagwant Mann himself will take charge of AAP’s campaign in Sangrur by-election, fight over ticket