CSK gave a target of 134 to GT, broke the record of most sixes in a season of IPL
Advertisement 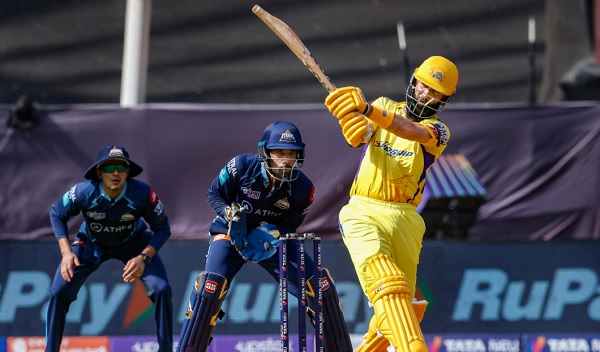 Mumbai, May 15: In the 62nd match of IPL 2022, Chennai Super Kings has given a target of 134 runs to Gujarat Titans to win. CSK scored this on the basis of innings of Ruturaj Gaikwad (53), Moeen Ali (21) and Jagdishan (33). The batsmen were seen struggling on the pitch and not much big shots were seen.

In this match, Chennai Super Kings won the toss and elected to bat and their young batsman Rituraj Gaikwad was seen playing an innings which can be appreciated in difficult situations. Gaikwad played this innings when CSK’s Devon Conway was dismissed for just 5 runs. After this Moeen Ali became the victim of Sai Kishore after scoring 21 runs in 17 balls. Then we got to see a partnership between Jagadeesan and Gaikwad. Earlier, Gaikwad also played a half-century partnership with Moeen Ali.

Gaikwad could have picked up the strike rate in the final overs but here he was trapped by Rashid Khan. Rashid Khan got this batsman out at the hands of Wade and Gaikwad’s innings came to an end. He hit 4 fours and a six.

Jagadeesan remained unbeaten till the end and scored 39 runs off 33 balls. Shivam Dubey was the victim of a duck and Dhoni could not finish with 7 runs in 10 balls, as a result, Chennai Super Kings gave Gujarat Titans an easy target of 134 runs to win. Mohammed Shami took 2 wickets giving only 19 runs in 4 overs.

‘Thomas Cup victory is bigger than 1983 World Cup’, Gopichand made a big statement on the historic title

Know how much property was owned by Andrew Symonds, history was created in IPL auction