CSK scattered like a pack of cards in IPL 2022, Mumbai did it for the fourth time
Advertisement 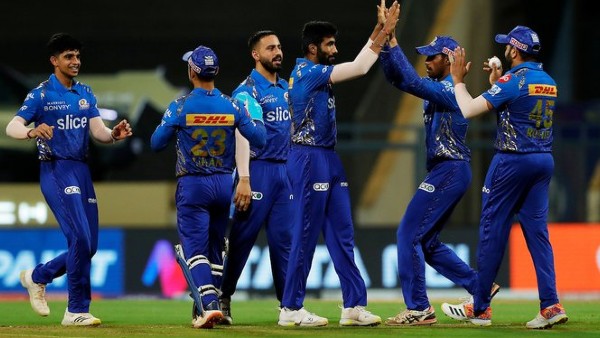 New Delhi. In the 59th match of the Indian Premier League (IPL) 2022, the team of Chennai Super Kings was scattered like a pack of cards in front of the bowlers of Mumbai Indians. Mumbai captain Rohit Sharma won the toss and decided to bowl first which proved to be correct. The team of Mumbai Indians, bowling first, bundled out the entire team of Chennai Super Kings for 97 runs in just 16 overs. Daniel Sams took 3 wickets for Mumbai, while Riley Meredith and Kumar Karthikeya took 2 wickets each.

Bumrah once again performed brilliantly in the bowling, conceding just 12 runs in 3 overs and throwing a maiden to his name. At the same time, Ramandeep Singh, who came to bowl his first over in IPL, also got success in the very first over and opened the account of the wicket by taking the wicket of Mahish Teeksha.

Read more: Know why Brendon McCullum will not be seen in IPL after 15th season, will have to leave KKR’s camp

CSK had lost 5 wickets in the powerplay itself.

In this match for Mumbai Indians, along with his bowlers, his luck also supported him, due to which his team was able to take 5 wickets in the powerplay. When the CSK team came to bat, they did not have DRS in the first two overs, due to which they could not go to the third umpire with Devon Conway and Robin Uthappa taking their wickets. Fast bowler Daniel Sams, who came to bowl the first over of the innings, gave shock to Chennai by taking two wickets. He first walked David Conway without opening an account on the second ball of the over and then also walked Moeen Ali (0) on the fourth ball.

Mumbai became the first team to do so

At the same time, the team of Rajasthan Royals occupies the second position in this list, which has done this feat twice in IPL history. On the other hand, if we talk about the rest of the teams, they have also done this feat once. For the CSK team, apart from MS Dhoni, only Shivam Dubey (10), Ambati Rayudu (10) and Dwayne Bravo (12) could cross the double figures. Talking about CSK’s innings, their batsmen have done only 9 fours and 3 sixes. At the same time, CSK has become the fourth team to be all out within 100 this season.