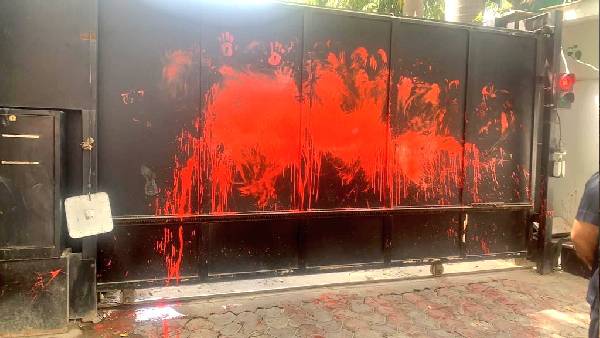 New Delhi, March 31: There was a ruckus outside Delhi Chief Minister Arvind Kejriwal’s house on Wednesday. BJYM workers protested after Kejriwal’s statement on the film ‘The Kashmir Files‘. During this, BJP workers broke the CCTV and barricades installed outside the CM house during the protest. On the one hand, where BJP MP and BJYM President Tejashwi Surya has demanded an apology from Arvind Kejriwal on the statement of ‘The Kashmir Files’, on the other hand AAP MLA Saurabh Bhardwaj has approached the Delhi High Court.

BJP Yuva Morcha president and Bengaluru MP Tejashwi Surya on Wednesday demanded an “unconditional apology” from Delhi Chief Minister Arvind Kejriwal over his remarks on ‘The Kashmir Files’ and Kashmiri Pandits. He also said that his protest will continue till he asks for the demand.

Our protest will continue: Surya

After the protest outside Delhi CM’s house, Tejashwi Surya said in the press conference that we protested against the way Delhi CM Arvind Kejriwal made fun of the massacre of Kashmiri Pandits in the assembly. “We demand an unconditional apology from Kejriwal and till he does not do so, the protest will continue,” Surya said.

Here, AAP MLA Saurabh Bhardwaj has reached the Delhi High Court against the vandalism outside the official residence of Delhi Chief Minister Arvind Kejriwal on Wednesday. In his plea, he has sought constitution of a special investigation team to conduct an independent criminal investigation into the incident. At the same time, in connection with the protests, Delhi Police has arrested a total of 8 people so far.

Will Naresh Patel and Prashant Kishor’s Khichdi be cooked in Mission Gujarat? Know what is going on in Congress