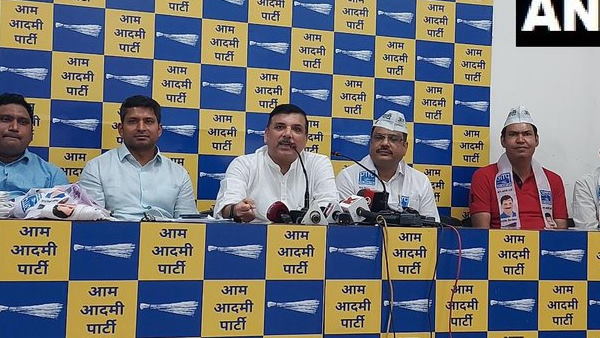 New Delhi, May 28: The ruling Aam Aadmi Party has fielded Durgesh Pathak as its candidate for the by-election to Delhi’s Rajendra Nagar assembly seat. Party MP Sanjay Singh has given this information. During this, Sanjay Singh challenged Delhi BJP President Adesh Gupta and said that he should come and contest from Rajendra Nagar. The Rajendra Nagar seat fell vacant due to the resignation of Raghav Chadha.

On Saturday, AAP MP Sanjay Singh said in a press conference, I want to tell BJP Delhi chief Adesh Gupta that Aam Aadmi Party’s MCD in-charge Durgesh Pathak will contest from Rajendra Nagar. He will be our candidate for the upcoming by-elections. Come and face him in the election here.

Sanjay Singh said, elections are fought in a democracy, let’s fight. Winning keeps on losing. Why are you (Aadesh Gupta) afraid of defeat? I tell the President of BJP Delhi that don’t run, show it by contesting elections. AAP MLA Saurabh Bhardwaj has said that the party is continuously preparing for Rajendra Nagar elections. He has claimed a big victory for the Aam Aadmi Party in the by-elections.

Seat vacant due to resignation of Raghav

In the assembly elections held in Delhi in the year 2020, Raghav Chadha of Aam Aadmi Party won from Rajendra Nagar. Chadha has been sent to Rajya Sabha by the Aam Aadmi Party, after which he resigned from the legislature. Now a by-election is being held on this seat. Voting for Rajendra Nagar seat will be held on June 23 and results will be declared on June 26.