Dhanush appeared for the first time after separating from Aishwarya, made public appearances with both sons
Advertisement 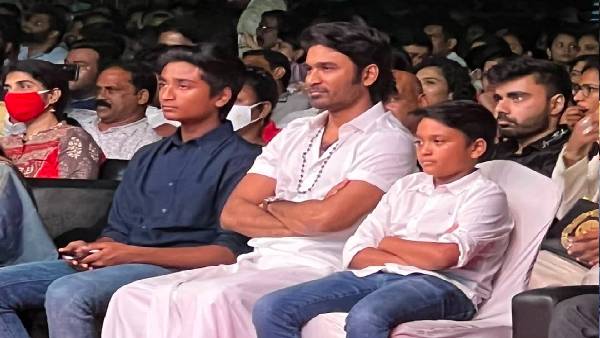 South’s superstar Dhanush is one of the most loved actors across the country. He always manages to win the hearts of the audience with his acting. However, earlier this year he broke the hearts of his fans after he announced his separation from his ex-wife Aishwarya Rajinikanth. Now after a month of divorce, Dhanush made his first public appearance with his sons Yatra and Linga. This was the occasion of Rock with Raja music program by Ilaiyaraaja in Chennai.

Many pictures and videos of the music event are becoming fiercely viral on social media. In the viral pictures, the ‘Maran’ actor looks quite handsome in a white traditional dress. Not only this, Dhanush also mesmerized the audience with his voice by going on stage, whose video is also going viral. Let us tell you that in January this year, Dhanush and Aishwarya announced their separation after 18 years of marriage. While issuing a statement, he had given the reason for getting divorced.

Although both of them are now divorced, but still they share a good bond with each other. Recently, Dhanush and Aishwarya came into the limelight when their ex-wife retweeted Dhanush’s tweet. Earlier this week, Dhanush congratulated Aishwarya for her new music video ‘Payani’. In which he called them “friends”. Replying to which Aishwarya called him thanks.

Kangana praised Munawwar Farooqui in lock up show, but gave warning for cunning

Why Payal Rohatgi clashed with Kangana Ranaut on ‘Lock Up’, Bollywood queen said – it is better if you do not tell your views