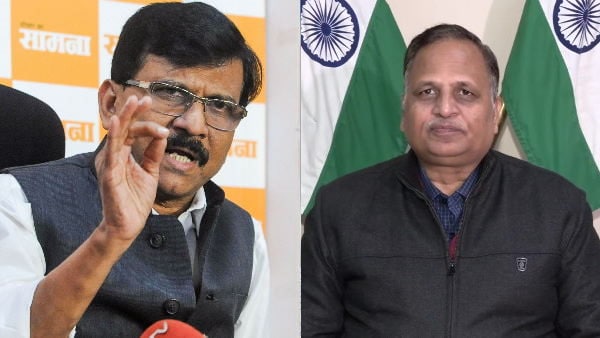 New Delhi/Mumbai, 5 April.
The Enforcement Directorate (ED) has attached the property of Shiv Sena leader and Rajya Sabha MP Sanjay Raut and another flat in Alibaug, taking a major action on corruption charges. Along with this, the ED has also taken action against the Minister of Health, Satyendar Jain in the Aam Aadmi Party government of Delhi. ED has attached assets worth Rs 4.81 crore of Satyendar Jain’s family.

Action on Raut in Patra land scam
The Enforcement Directorate has taken this action against Sanjay Raut in the Patra rice land scam case of Rs 1034 crore. The two properties of Sanjay Raut, which have been attached by the ED, include a plot belonging to the Shiv Sena leader in Alibaug and a flat in Dadar.

Earlier, the ED had filed a chargesheet in the money laundering case against Praveen Raut, an alleged close aide of Sanjay Raut in the Patra land scam case. The ED, in its investigation, had found that money was transferred from the account of Praveen Raut’s wife to Sanjay Raut’s wife. The ED has also raised suspicions that the land in Alibaug was purchased through this illegally obtained money.

The ED said that a total of 11.15 crore property has been seized in the form of land of Praveen Raut, former director of Guru Ashish Construction Pvt Ltd. Along with this, the flat of Sanjay Raut’s wife Varsha Raut in Dadar and Alibaug plot has been attached. Both these properties are in the name of Varsha Raut and Sujit Patkar’s wife Swapna Patkar.

Sanjay Raut retaliated
Describing the action as an attempt to intimidate Sanjay Raut, the ED said that he is not one to be afraid. The Shiv Sena leader said, “We are not one to be afraid, whether we can confiscate property, shoot us or send us to jail. Sanjay Raut is Balasaheb Thackeray’s disciple, Shiv Sainik, he will fight and open your poles. Will stay.”

#WATCH
“… I’m not one to get scared, seize my property, shoot me, or send me to jail, Sanjay Raut is Balasaheb Thackeray’s follower & a Shiv Sainik, he’ll fight & expose everyone. I’m not one to stay quiet, let them dance. The truth will prevail”: Shiv Sena leader Sanjay Raut

Action on close relatives of Satyendra Jain
Taking action against the Health Minister Satyendar Jain in the Delhi government, the ED has attached assets worth Rs 4.81 crore belonging to Jain’s family.

The family members of Satyendar Jain are associated with some such firm which is being investigated under the Prevention of Money Laundering Act.

Now the resolution has been passed in the Haryana Vidhan Sabha also regarding Chandigarh, Vij said – Angad’s foot is our decision

Calling AAP MLA and said – I will shoot you in 2 days, Punjab Police is looking for