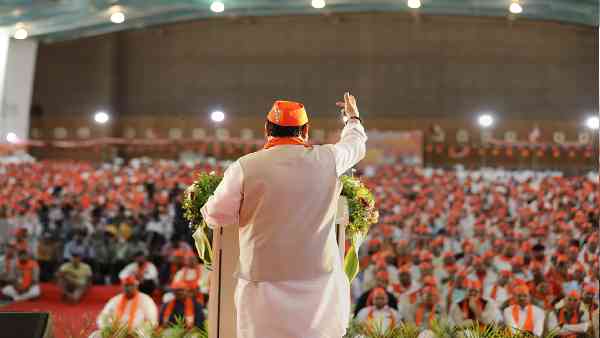 Election to preserve reputation for BJP

The action of political parties has started in Gujarat for the assembly elections to be held later this year. The truth is that even Prime Minister Narendra Modi himself had started it with the 5 assembly elections held in February-March. Gujarat assembly election is not a normal election for BJP. The party has been winning here for five consecutive elections and this time it is trying to form the government for the sixth time. For the politics of BJP, the Gujarat election is in a way related to its political identity. Because, this is also the home state of Prime Minister Modi and Home Minister Amit Shah. In the 2017 elections, the BJP was successful in saving the government by winning 99 out of 182 seats here. But, then the Congress had presented a very tough challenge to the ruling party.

The politics of two parties has been going on in Gujarat for at least two and a half decades. The BJP has been firmly in power and the Congress has made every effort to oust it. The results of some local elections in the recent past have raised the hopes of Delhi Chief Minister Arvind Kejriwal and his team. The Aam Aadmi Party wants to present itself here as an alternative to the Congress. The party has kept a close watch especially on its Muslim vote bank. Apart from this, she wants to triangulate the electoral fizz here this time with her ‘free politics’. With these aspirations, the party has planned a 20-day ‘Parivartan Yatra’. Even after the formation of the party’s government in Punjab, its spirits are high and its convener Arvind Kejriwal has visited the state at least five times in the past. The party has also forged an alliance with the Bharatiya Tribal Party to make an impact on the tribal seats and Kejriwal has also addressed the Adivasi Sankalp Mahasammelan in Bharuch on May 1.

This will be the first time for the Congress after decades, that the party will enter the election field here without planning Ahmed Patel’s strategy. Patel was not only the biggest political face of Congress and Sonia Gandhi’s most trusted political face, but without his gesture, it was impossible for anyone except the Gandhi family to shake a leaf in the party. Then Gujarat was his home state. After the departure of the late Patel, his son Faisal Patel has also questioned his neglect on the part of the leadership through a tweet some time ago. He has also said that the option is open. In the last elections, the Congress gave a tough competition to the BJP, so it was also affected by the Patidar movement, whose leader Hardik Patel was publicly accused of being made a ‘minister without department’ (the charge of not fixing the responsibility despite being the executive president) in the Congress. But he has expressed his anguish. Party MLA Ashwin Kotwal, former MLA Manibhai Vaghela and stalwarts like Praveen Maru, Vasant Bhatol have already sided with the BJP. Though Rahul Gandhi has staked claim to form the next government in the state, the organization seems to be in need of a lot of thrashing right now.

Who is giving more tension to BJP?

On the other hand, BJP has also started bowing its head in a two-day contemplation camp to chalk out a strategy for the next elections in Ahmedabad from Sunday. According to the information, Home Minister Amit Shah himself, along with the party’s Gujarat in-charge Bhupendra Yadav and Chief Minister Bhupendra Patel, are engaged in making strategies with the state leadership. It is believed that in this meeting, the idea of ​​including Congress rebels before the elections is also to be considered. Sources say that before giving tickets to the leaders who have recently joined the party, a criterion can also be set about their chances of victory, because in Gujarat the party can not accept anything less than victory. ! Therefore, a strategy can also be made to deal with the noise of five-term anti-incumbency, inflation, petrol-diesel prices and unemployment from the opposition. Because, these are all such issues, which would be giving maximum tension to the BJP leadership at this time.

Hyderabad MP Asaduddin Owaisi’s party AIMIM has also started laying election trap in Gujarat this time. Party chief Owaisi has held a meeting in Jignesh Mevani’s constituency Vadgam on Sunday, in which he has started laying his political chessboard by burying the wounds of all the riots in Gujarat including 2002. He has said, ‘I am standing on the ground where most of the riots happened in the country. Be it the 69 riots, the 1980 riots, whether it was the aftermath of the Babri Masjid, whether it was the massacre of 2002, but I salute the people who live on this land, who are still alive with their courage. …..and are living their life with pride.’