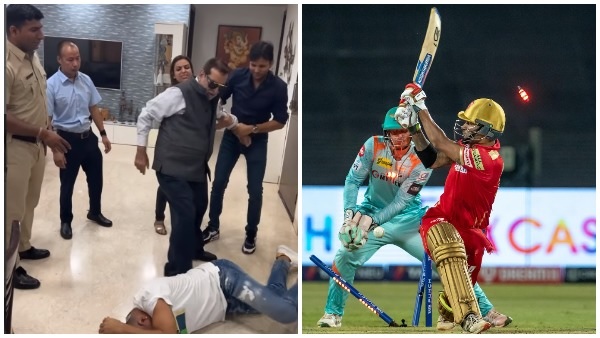 no one could save dhawan from beating

There were other people standing nearby who tried to stop the father but no one could save Dhawan from beating. One person was also in police uniform. But at the end of the video another sight is seen. The man in police uniform is smiling at the end and the man stopping Dhawan’s father is also trying to avoid laughing. Only Shikhar Dhawan and a girl are not laughing. Although Hans’ father is no more, but in a short time it is known that this video has been uploaded by Shikhar Dhawan for some other purpose.

this is the attitude of the father

In the video, Dhawan is telling that this is the attitude of his father after his IPL campaign got spoiled. Shikhar Dhawan this time played in the team of Punjab Kings which absolutely failed to qualify and never looked good throughout the season. However, the left-handed batsman managed to score decent runs and scored 460 runs in 14 matches at an average of 38.3. Dhawan is also known to narrate his adventures on social media in a witty manner.

father knocked me out

This time, Dhawan has also got the support of his father in making him laugh. The video has garnered more than a million likes and fans are laughing and laughing because the video is very funny, awesome and tickles the stomach. This video has been captioned – My father knocked me out for not qualifying for the knockouts.

Uncle is seen in full fire

In the video, Dhawan is standing facing his father and his father has black glasses on his eyes. Dad is looking like a fanatical father. Reacting to this video, India‘s spinner Harbhajan Singh writes – Bapu tere se bhi upchar ka actor nikle, what is the matter.

Dhawan went but the team flopped

The Punjab Kings team finished sixth in the points table as they won seven out of 14 matches. A team of Mayank Agarwal was looking very good after winning the opening match but as happens in a big competition like IPL, there are bound to be ups and downs, only through which a team can reach the playoffs and the title and many big ones. Bade Soorma also struggles to put up a similar performance in this long league.

Dhawan was not selected for Team India

Shikhar Dhawan looked good in the league but didn’t have that smokiness due to which he has not been given much value by the BCCI and he has been sidelined in the Indian T20 series against South Africa. Dhawan did not bat very fast this season. The India-South Africa match is taking place on June 5.

Dhawan ‘failed’ but the video passed

Seeing this video of Dhawan, people born in the 80s and 90s must have shuddered because there was a time when you used to return home with bad results and get scolded or scolded by your father. However now times have changed rapidly. Parents have become more and more friends with kids but this video of Dhawan is quite ticklish and passes full marks in its task of providing entertainment.

After 3 years, the closing ceremony will be held in IPL, Ranveer Singh and AR Rahman will be seen

RCB spoiled the track record of Karn Sharma, was included in the team considering the luck factor, know what is the matter