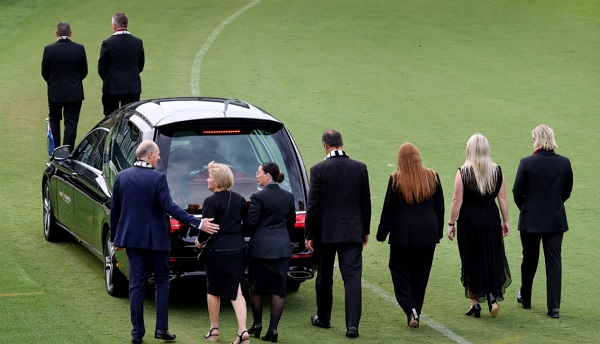 Melbourne, March 20: The last rites of Australian spin legend Shane Warne took place in his hometown of Melbourne on Sunday. As per reports, the family and friends of the late cricketer attended the funeral. Family members include his parents Keith and Brigitte as well as his three children Brooke, Jackson, and Summer.

Warne died of a heart attack on March 4 this year at the age of 52. He was found dead in his hotel room in Thailand, where he was vacationing with his friends. His sudden demise shook the whole world and they all came forward to pay their last respects to the legendary leggie.

Members of the cricket world paid tribute to Shane Warne-

Members of the cricket world were present on the occasion to bid goodbye to the great cricketer. They included former team captain Allan Border, Mark Taylor and Michael Clarke. Former England captain Michael Vaughan was also reportedly present. Other members who were in attendance included the great Australian fast duo of Merv Hughes and Glenn McGrath. Mark Waugh of the 90s and former wicketkeeper-batsman Ian Healy to name a few.

Meanwhile, there will be a State Memorial in honor of the 1999 World Cup winner at the prestigious Melbourne Cricket Ground on March 30. Earlier this month, it was officially confirmed that the MCG’s Great Southern Stand has been renamed the Warne Stand in memory of the spinner.

Shane Warne still remains the second highest wicket-taker in Test cricket with 708 wickets. Also, he is also the only bowler after Sri Lankan spin legend Muttiah Muralitharan to take more than 1000 international wickets. Overall, he finished with 1001 wickets at the highest level. Warne bowled the ‘Ball of the Century’ when he beat England batsman Mike Gatting with a dream delivery during the 1993 Ashes Test match at Old Trafford, Manchester.