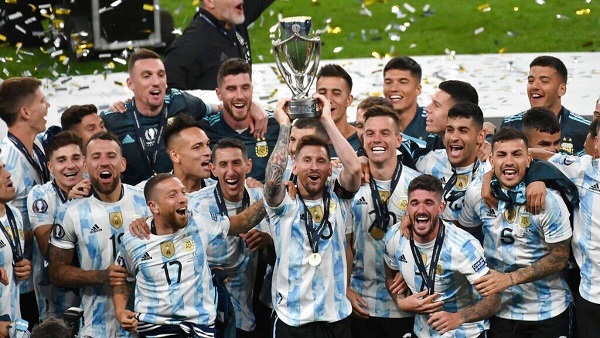 New Delhi.
On the strength of Lionel Messi, Argentina became the champion in the CONMEBOL-UEFA Cup of Champions i.e. Finalissima in London on Wednesday. Copa America winners Argentina defeated European champions Italy 3–0. Messi could not score any goal, but he inspired the team to fight. The first goal was scored by Lautaro Martínez in the 28th minute. Then Angel Di Maria took a two-goal lead in the first half thanks to the strike. Then Paulo Dybala scored Italy’s third goal for the team.

This is the third season of the CONMEBOL-UEFA Cup of Champions. Earlier in the year 1985 and in the year 1993, this season has been organized under a different name. Then this season was not extended for several years, but in the year 2020 under the agreement between UEFA and CONMEBOL, it was organized once again this year. In 1985, France defeated Uruguay 2–0 to win the title, while in 1993 Argentina won the title by defeating Denmarko in a penalty shootout.

Argentina’s dominance continues
Let us tell you that Argentina continues to dominate the football world. Argentina has not lost in the last 32 matches and since July 2019, the team has been winning or drawing consecutive matches. On the other hand, Italy’s team got only 2 wins out of the last 7 matches, while 3 have lost. Two matches were drawn. Last year, the team lost to Spain in the Nations League semi-finals in October, while North Macedonia in March this year surprised everyone by defeating Italy and knocking them out of World Cup qualification.