For the first time in the history of IPL, 9 wickets fell in the powerplay, Chennai Super Kings out of the race for playoff
Advertisement

'He used to sleep without having a full meal, but did not tell his mother', remembering the days of struggle, the RR bowler got emotional

'Looks like I am talking to the wall', Dravid-Lakshman's funny meeting happened again

'He can be the captain of CSK for a long time', Sehwag said - Dhoni has all the qualities in him 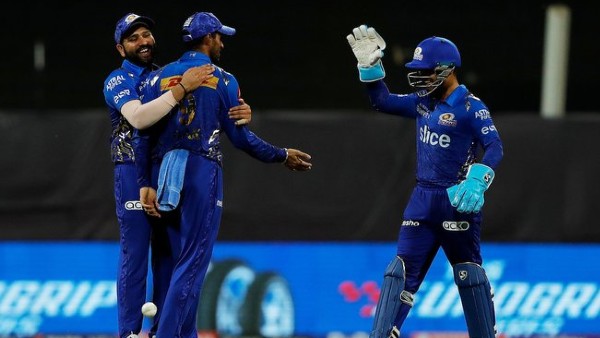 New Delhi. The 59th match of the 15th season of the Indian Premier League was played at the Wankhede ground where fans got to see an exciting match between Mumbai Indians and Chennai Super Kings. Mumbai Indians team won the toss in this match after a long time and decided to bowl first and bowled out Chennai Super Kings team for 97 runs in just 16 overs. Captain Mahendra Singh Dhoni scored an unbeaten 36 for CSK’s team, but apart from him, no other batsman could manage to show his talent.

In reply, Mumbai Indians team lost their 4 wickets on the score of just 33 runs, but after this Tilak Verma and Hrithik Shokeen (18) shared a 48-run partnership to take their team to the threshold of victory. On the other hand, Tilak Verma (34) along with Tim David (16) broke CSK’s dream of reaching the playoffs and helped his team win by 5 wickets in 14.5 overs. With this defeat, CSK’s team has failed to qualify for the playoffs for only the second time in IPL history.

Read more: CSK scattered like a pack of cards in IPL 2022, Mumbai did it for the fourth time

With this defeat, the Chennai Super Kings team has become the second official team to be out of the race for the IPL 2022 playoffs. Before CSK’s team, Mumbai Indians became the first team to be out of the playoff race this season. Surprisingly, both the teams that won the most titles in IPL history became the first teams to be eliminated this season.

Read more: ‘Looks like a street cricketer, not an international one’, Aakash Chopra points out the big flaw in Iyer’s batting

Mukesh Chaudhary bowled brilliantly for CSK and took 3 wickets for 23 runs in the spell of 4 overs, in which the names of Ishan Kishan (6), Daniel Sams (1) and Tristian Stubbs (0) were included, while Simarjit was there. Singh took the wicket of Rohit Sharma (18) for 23 runs in the spell of 4 overs. Moeen Ali did break the partnership by taking the wicket of Hrithik Shokeen but by then it was too late and the Mumbai team had ensured their victory.