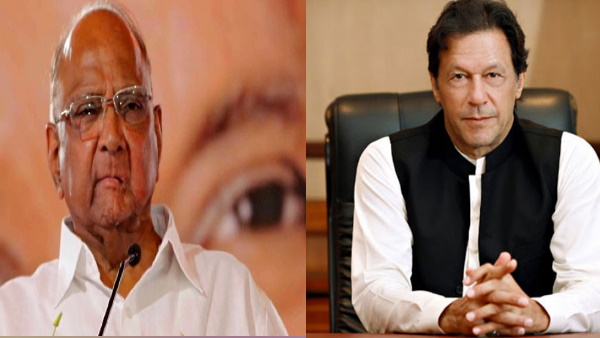 New Delhi, May 13. Nationalist Congress Party (NCP) chief Sharad Pawar on Thursday praised former Pakistan Prime Minister Imran Khan. He described former Pakistan Prime Minister Imran Khan as a “leader trying to give direction to his country”. Sharad Pawar made this statement while talking about the happenings around the world including India‘s neighbourhood.

NCP leader Sharad Pawar while addressing an ‘Eid-Milan’ function at Nodhwa, Pune said today a different kind of situation prevails in the world. A country as powerful as Russia is attacking a small country like Ukraine, in Sri Lanka the youth are on the streets, fighting, and the leaders of that country have gone underground.

But he was ousted from power
Leader Sharad Pawar, 81, spoke directly about Imran Khan without naming the latter. Sharad Pawar said that in neighboring Pakistan, where you and my brothers are there, a leader took the reins of the Prime Minister’s post. An attempt was made to show that country a direction, but he was ousted from power and now a different picture is visible there.

Sharad Pawar mentioned about Pakistan visit
Pawar further said that as a union minister and cricket administrator, he visited Pakistan several times. Be it Lahore, Karachi, wherever we went, we were warmly welcomed. Once we were in Karachi with our team for a match. A day later, the players expressed their desire to see the places around them. We went to a restaurant for breakfast and when we tried to pay the bill, the restaurant owner refused. He said that we were his guests. In the end he said that ordinary Pakistanis are not enemies of India and the struggle in their country is only in favor of those who want to do politics.

Imran Khan was out of power in April
Let us tell you that 69-year-old Imran Khan is a former cricketer under whose captaincy Pakistan won the World Cup in 1992, after retirement he came into politics. Imran Khan founded the Tehreek-e-Insaf (PTI) in 1996, and in August 2018, became the 22nd prime minister of the nuclear-armed nation. However throughout his premiership, Khan was taunted by the opposition for being a ‘puppet’ of the powerful army and the ‘selected prime minister’. In April 2022, he was ousted from power by the opposition through a vote of no confidence.

Revealed by PM Modi – Leader of the opposition said that becoming Prime Minister twice is enough, but he does not know.

‘When he gets time, he will talk to me’…..Hardik Patel is praising Rahul like this