From 2008 to 2022, these stalwarts won the 'Man of the Match' award in the finals
Advertisement 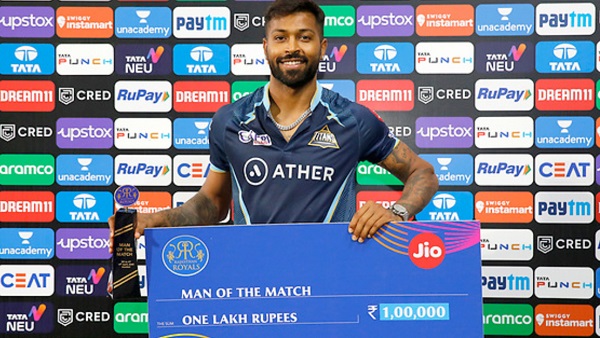 New Delhi.
Gujarat Titans has won the Indian Premier League (IPL) 2022 title. Gujarat Titans won by 7 wickets against Rajasthan Royals and captured the IPL trophy for the first time. Captain Hardik Pandya also played an important role in Gujarat’s victory, who played an important role not only with the bat but also with the ball. In the final too, Hardik won the man of the match award by giving his important song. With this, he has joined the list of players who won the man of the match award in the final.

In the final match played at Narendra Modi Stadium in Ahmedabad, Rajasthan scored 130 runs for the loss of 9 wickets. Hardik also left no stone unturned to sabotage Rajasthan’s batting. Hardik took 3 wickets for 17 runs in 4 overs. Hardik dismissed dangerous batsmen like captain Sanju Samson, Jos Buttler and Shimron Hetmyer. At the same time, Gujarat captain Hardik Pandya played an important role in chasing the target. He scored 34 runs in 30 balls with the help of one six and three fours. Gujarat could easily achieve the target on the basis of his innings.