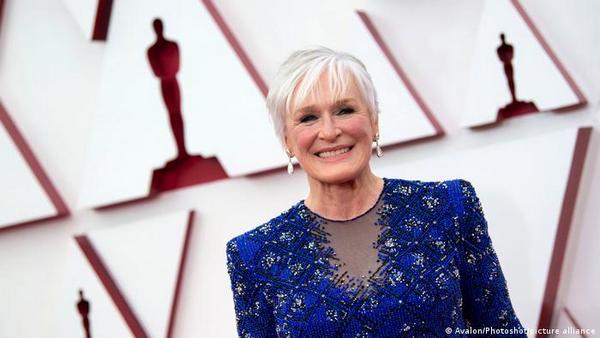 Glenn Close is one of the most versatile actors in Hollywood. It seems she can play anything: unscrupulous, malicious and scheming women, women scarred by life, desperate, suffering women – or even, credibly, a man.

While anti-heroines are her biggest strength, she is not committed to any one genre, and despite her age, she regularly stands in front of cameras for major productions.

All the while she gives fans glimpses into her everyday life via Instagram, where she describes herself as an actor, producer and writer as well as “an introvert with extremely low tolerance to all kinds of noise. Proud to be Pip’s main human.”

Glenn Close and the Oscars

At the 2021 Oscars,she showed an audience of millions that she’s up for a bit of fun with her spontaneous dance to the hip-hop song “Da Butt” from Spike Lee’s 1988 film “School Daze” – people in the audience and on social media were enthusiastic.

Glenn Close has been a welcome guest at the Oscars for decades. Her very first feature film, the 1982 adaptation of the novel

The World According to Garp, saw her nominated for best supporting actress, but she left empty-handed. That happened to her over and over again.

Today she is considered the “most successful” Oscar loser – tied with Peter O’Toole (1932-2013), she holds a record eight Academy Award nominations without ever winning one. Glenn Close seems to shrug it off. Perhaps that is not too difficult because no one can deny that she is an incredibly successful, esteemed and talented actress despite the empty Oscar shelf.

She is brilliant as a character actor, but doesn’t mind action or mainstream movies, either, as well as indie films – as long as it’s not boring, which is particularly important when he chooses roles, she told Germany’s Frankfurter Allgemeine Zeitung in 2012 , the year she was honored for her life’s work at the San Sebastian Film Festival.

She owes her unprecedented career above all to her acting skills and her willpower. Her parents had not encouraged her career choice, arguing acting was not good for the character, Close told Kölner Stadt-Anzeiger in 2019. Her father rather urged her to learn shorthand when she was still in college, so she could become a secretary if need be.

From the stage to Hollywood

Close, who was born into a strict Puritan family in Greenwich, Connecticut, on March 19, 1947, and lived in a cult-like religious community until she left in her early 20s, was not to be deterred, however. She studied acting and anthropology and was a stage actor before finally landing in film in her mid-30s.

Glenn Close is often associated with loathsome, unscrupulous female characters. Yet from her point of view, only one of her roles was a truly evil character: Cruella de Vil from the movie “101 Dalmatians.” “As her last name suggests, she is the devil in disguise,” she said in the interview with Frankfurter Allgemeine Zeitung.

“All my other film characters are not really evil in my eyes. For me, they definitely have something human, vulnerable, too, and in a way, I can understand them – they are women trying to hold their own in a harsh male world ” If they were men, she told the paper, they probably wouldn’t be called evil, “people would find their behavior quite normal.”

The actor had to prove himself in a man’s world. Perhaps it was her advantage that she didn’t arrive in Hollywood until her mid-30s, an age at when many a career was already waning. After all, older female actors have a harder time landing a role. Glenn Close, however, was able to choose her roles for a long time. Most recently, she played in the 2021 film drama “Swan Song.”

Glenn Close passed on her love of acting to her daughter, Annie Starke; sometimes the two women are cast in the same movie. Close’s three marriages failed, the actor now lives alone with his beloved dog Pip. Close is an advocate for democracy and involved with Bring Change to Mind, the non-profit organization to end stigma and discrimination surrounding mental illness she co-founded.

This article has been translated from German.