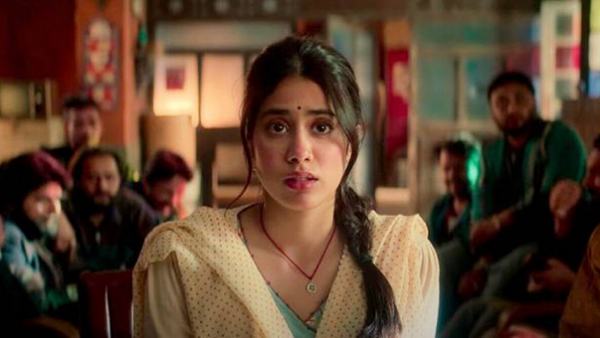 Jerry (Janhvi Kapoor), who moves to Punjab from Darbhanga in Bihar, is struggling with her mother (Mita Vashisht) and younger sister Cheri when she suddenly encounters a gang of drug dealers one day. Jerry starts out coercive, but soon she realizes that she can get all the money she needs from this job. Jerry needs 20 lakh rupees for his mother’s cancer treatment. Therefore, she does not want to get involved in the business of drug dealing. The gang members are also very self with his work because because of his innocent appearance, Jerry easily bluffs the policemen. But the trouble starts when Jerry thinks of quitting the business. He and his family members are threatened with death by the head of the gang. But as Jerry says – “We are not as much as we look”.. She doesn’t kneel before the goons and dazzles everyone with her cunning. But how all this is possible.. It is quite interesting to see.

Janhvi Kapoor has given a stellar performance in the character of Jaya Kumar aka Jerry. Full of simple innocence but courageous and clever, Janhvi firmly establishes her character. It would not be wrong to say that Janhvi is getting stronger with each of her films. The emotion shown by Janhvi in ​​the emotional scenes of this film is quite impressive. One moment she looks innocent, another moment she kills her opponents. Her character in the film has been given a Bihari tone, where she falters a bit, but hides this shortcoming with her acting. There are some great scenes with Meeta Vashisht and Janhvi. At the same time, Deepak Dobriyal, Sushant Singh, Neeraj Sood, Saurabh Sachdeva, Jaswant Singh Dalal .. all the actors are very much stuck in their characters. The dose of comedy in the film was mainly attributed to Deepak Dobriyal and he has left no stone unturned here.

Directing the story of a mother selling momos and two daughters, Siddharth Sen has served it in such an entertaining way that you are constantly attached to the film. Usually, the emotional touch is lost from the story during remakes. But here the director has taken care of that matter. Also the good thing is that the film does not take much time to establish the characters, rather the story has been taken to the main point in the first half hour itself. Yes, the story gets a bit predictable at some places, but the characters keep you hooked to the story. Janhvi might be the main cast of the film, but the good thing is that the director has given full space to the supporting cast on the screen.

Technically, the film is strong. Prakash Chandra Sahu’s tight editing takes the film a notch higher. At the same time, Rangarajan Rambandran’s cinematography attracts. From the fields of Punjab, from the streets to the courtyard of the house, he has captured the camera with great precision. The costume designing of the film should also be praised.

The songs of this film are composed by Parag Chhabra. The lyrics of the song are written by Raj Shekhar, which are excellent. Even after the film is over, the effect of its songs remains for some time. The background score of the film has been composed by Aman Pant. It would not be wrong to say that the music of the film makes the story stronger.

Right amount of emotion and comedy, good story and strong starcast… ‘Good Luck Jerry’ has it all. The film starts off with an emotional tone, but by the end, there is such a rush that you are left with a laugh. The film has been released on Disney Plus Hotstar and it is the perfect film to watch with family. 3.5 stars from Filmbeat to ‘Good Luck Jerry’ starring Janhvi Kapoor.

‘Ek Villain Returns’ review: From weak story to performance, this action thriller disappoints in every way

Tiger Shroff – The reason for Disha Patani’s breakup, one wanted early marriage, the other wanted a career