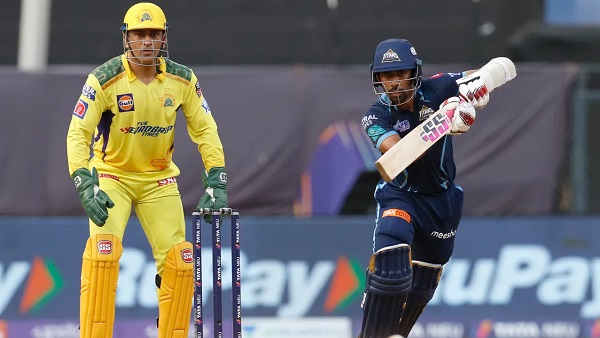 Mumbai : In the 62nd match of the Indian Premier League (IPL) 2022, Gujarat Titans registered an easy victory by defeating Chennai Super Kings by 7 wickets. With this win, Gujarat again proved that they are the strongest team in the current season. Playing comfortably, Gujarat achieved the target of 134 runs from Chennai on the first ball of the last over. With this, Gujarat has got its 10th victory in 13 matches. They are on the top with 20 points, while Chennai have suffered their 9th defeat in 13 matches.

Chasing the target, opener Saha scored an unbeaten 67 off 57 balls, which included fours and a six. At the same time, Matthew Wade contributed 20, Shubman Gill 18 and David Miller contributed 15 not out. Hardik Pandya scored 7 runs. Saha got the win by hitting a first ball of the last over of Mathisha Pathirana’s innings. Pathirana got 2 wickets from Chennai’s bowling side, while Moeen Ali took 1 wicket.

Earlier, Chennai captain Mahendra Singh Dhoni won the toss and elected to bat, but the Gujarat bowlers did not give their batsmen a chance to play freely. In the third over of the innings, Mohammed Shami walks David Conway. He could score 5 runs. Then Moeen Ali, who came at number three, together with opener Rituraj Gaikwad, handled the innings. Both shared 57 runs for the second wicket. Sai Kishore broke the partnership by dismissing Ali. Ali scored 21 runs. Then N Jagadeesan took over the innings with Gaikwad. Both shared a 48-run partnership for the third wicket. During this Gaikwad scored his 9th IPL fifty. He was then dismissed for 53 runs in 49 balls hitting 4 fours and 1 six. While N Jagadeesan contributed 39 not out. Jagdishan hit 3 fours and 1 six in 33 balls. For Gujarat, Shami took 2 wickets for just 19 runs in 4 overs, while Rashid Khan, Alzarri Joseph and Sai Kishore got 1-1 wickets.

LSG vs RR: After a long wait, Rajasthan Royals won the toss, teams came out with 3 changes

Pictures of Sara Tendulkar created a sensation, the person said – life is incomplete without you