GT vs RR: Captain Hardik's bowling dominated the final match, broke Rajasthan's back and made a big record
Advertisement 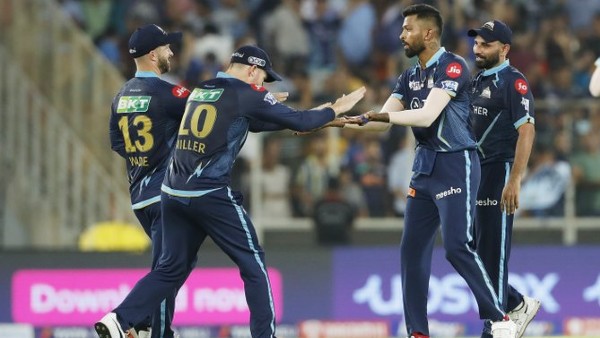 Rajasthan got off to a good start in the powerplay.

After the powerplay, Butler tried to increase the scorecard rapidly by hitting two consecutive fours in Ferguson’s over but captain Hardik Pandya changed the course of the match in the middle overs. Hardik Pandya conceded just 17 runs in his 4 over spell and sent 3 big batters of Rajasthan Royals back to the pavilion. Hardik Pandya first took the wicket of skipper Sanju Samson (14) and became the second captain after 2009 to send back the captain of the facing team in an IPL final. Before Hardik, this feat was done by Anil Kumble.

Pandya bowled a record in the final

After Samson, Hardik Pandya gave a second big blow to Jos Buttler (39) by getting caught by Saha, while in his last over, Shimron Hetmyer was caught on his own ball and ended his spell. Hetmyer had hit 2 consecutive fours against Hardik before getting out in this over. With this, Hardik Pandya has become the second captain to bowl brilliantly in the IPL final. Anil Kumble took 4 wickets for 16 runs in the final match played against Deccan Chargers in 2009, while Hardik Pandya has now taken 3 wickets for 17 runs and has taken the second position in this list. .

The way Hardik Pandya has bowled has not only given the Gujarat Titans fans a chance to rejoice but the fans waiting for his return to the Indian team have also got a chance to celebrate. Apart from Hardik Pandya, R Sai Kishore also bowled brilliantly for Gujarat Titans and took 2 wickets for 20 runs in 2 overs. Rashid Khan also gave skimpy runs in the spell of 4 overs and took one wicket for 18 runs. Yash Dayal also gave away 17 runs in 3 overs and took 1 wicket. Barring Jaiswal, Butler, Samson, Boult, Parag and Hetmyer, none of the batsmen could cross the double mark for Rajasthan Royals.

World record made in the final of IPL 2022, about 1.5 lakh spectators reached the Narendra Modi Stadium to watch the match

GT vs RR: Sanju Samson became the victim of Hardik Pandya, after the final of 2009, a captain dismissed the captain