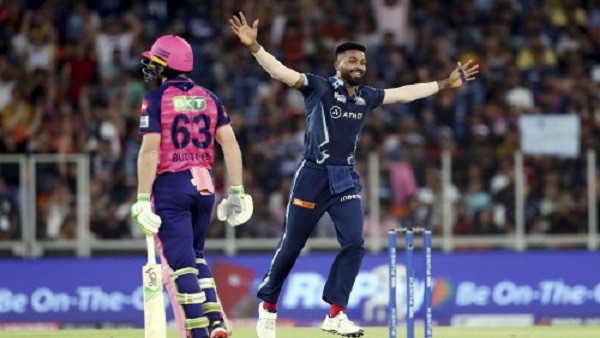 New Delhi, May 29. In the title match of IPL 2022, Gujarat Titans captain Hardik Pandya has bowled dangerously. Hardik has bowled brilliantly in a big match like the final against Rajasthan Royals. Hardik dismissed 3 big players for 17 runs in his spell of 4 overs. After this performance of Hardik, fans on social media are praising him.

‘Pandya became a big player of the shorter format’

Pandya did wonders in batting too

Hardik Pandya has done wonders in batting after bowling brilliantly. Pandya has scored 34 runs in 30 balls while playing the captaincy innings. However, Pandya could not play a long innings and lost his catch at slip off a ball from Chahal. Pandya made a half-century partnership with Matthew Wade.

Hardik Pandya – the best all-rounder from India in limited overs.

Hardik Pandya is turning out to be a great captain in this year’s IPL. #GTvsRR #TATAIPL2022 pic.twitter.com/LjAj2gz63i

Hardik Pandya has the second best bowling figures in the IPL Finals as a captain.

A comeback to mark and remember by Hardik, in the biggest match of the season he steps up and does his job tremendously. pic.twitter.com/7PL9q0QHk2

HARDIK the BOWLER is back .. what a spell captain@hardikpandya7 @gujarat_titans

1) Mohsin Khan & Arshdeep Singh with the ball.
2) Hardik Pandya stepping up in the leadership role.
3) Krunal Pandya & Deepak Hooda playing for one team & celebrating with each other.
4) Tilak Varma’s debut.

If Hardik Pandya can bowl, he should not only play T20Is for India but also lead India in the format.

I cannot think why not.

If you think he shouldn’t lead, I hope it is a reason other than “I don’t like him” or “I don’t rate him as a captain, just like that”.

Also read: VIDEO: Jos Buttler’s bat did not play in the final, threw the helmet in anger

VIDEO: Jos Buttler’s bat did not play in the final, threw the helmet in anger